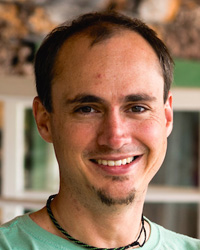 Sawyer Fuller creates biologically-inspired sensors, control systems, and mechanical designs targeted at insect-sized air and ground vehicles, and investigates the flight systems of aerial insects. He completed his Ph.D. in Biological Engineering at the California Institute of Technology and B.S. and M.S. degrees in Mechanical Engineering at the Massachusetts Institute of Technology. In addition to his work in insect flight control, he also developed a frog-hopping robot at the NASA Jet Propulsion Laboratory and invented an ink-jet printer capable of fabricating millimeter-scale 3D metal machines at the MIT Media Lab. He is the recipient of a National Science Foundation Graduate Fellowship and a Presidential Fellowship from MIT. His work has appeared in Science and Proceedings of the National Academy of Sciences.

Professor Fuller directs the Autonomous Insect Robotics Laboratory at the University of Washington, which works to advance insect-scale robotics engineering and better understand the capabilities of insects.

How can you create a fully autonomous robot as small as a fly? This is an open challenge because scaling physics makes traditional approaches impractical. My research takes inspiration from insects to overcome this, producing operational insect-scale prototypes.

Insect-scale robots—measuring approximately a centimeter across—have unique capabilities not shared by larger robots. For example, they could deploy in very large swarms or navigate tiny spaces to perform detailed environmental monitoring. But insect scale imposes miniaturization challenges: it is not enough to simply reduce component size. Many conventional robot and aircraft technologies like electric motors, GPS sensing, gliding flight, and even general-purpose microprocessors, cannot operate efficiently or effectively at insect scale. This is because dominant physical effects change as scale reduces. One way to overcome this is to look to solutions used by biology. For example, rather than gliding like birds, flies and bees continually flap their wings as an adaptation to the greater effect of viscous drag at small scale. More than that, insects have superlative capabilities that outclass current robots. Watch as a honeybee navigates to a flower and then deftly lands on it while buffeted by wind—all of which is orchestrated by a tiny brain. These animals point the way toward future insect robotics that satisfy scaling constraints while navigating with speed and agility through complex, uncertain environments.

My work aims to take inspiration from insects to find scale-compatible solutions for centimeter-scale robots. My approach combines experimental study on insects—whose feedback systems are not well understood—with at-scale robotic implementations. Basic flight mechanics and simple sensing systems have been demonstrated on insect robot prototypes, but there remain many unsolved problems. In particular, solutions to the following do not yet exist: performing control computations onboard, achieving sensor autonomy (no external sensors), and incorporating the power source onboard. Rivaling the performance of insects remains a distant target. I strongly believe that progress will be fastest by combining forward-engineering in robotics with reverse-engineering in biology. The results will extend beyond insect robots to anywhere there is a need for miniaturized and power-efficient sensing, power-efficient control systems, and more dynamic, robust, and lifelike robots. The effort may also give unique insights into the operation of the brain. Areas of particular interest to me are computation-constrained visual navigation, odor plume localization, and the interplay of control and mechanics.

ME researchers created a sensing system that enables 10-mg aerial robots to control their flight.

A team led by ME Assistant Professor Sawyer Fuller has put together the necessary sensing hardware to enable stable, autonomous flight for tiny robots.

ME researchers created a sensing system that can help stabilize tiny flying devices.

Assistant Professor Sawyer Fuller is featured in a story about how insects give researchers inspiration for micro-robot advances.