By Chelsea Yates
Photos by University of Washington
November 8, 2017

The UW Human Powered Sub Team has blended traditional boatbuilding with aerospace and marine engineering to create an award-winning submarine. 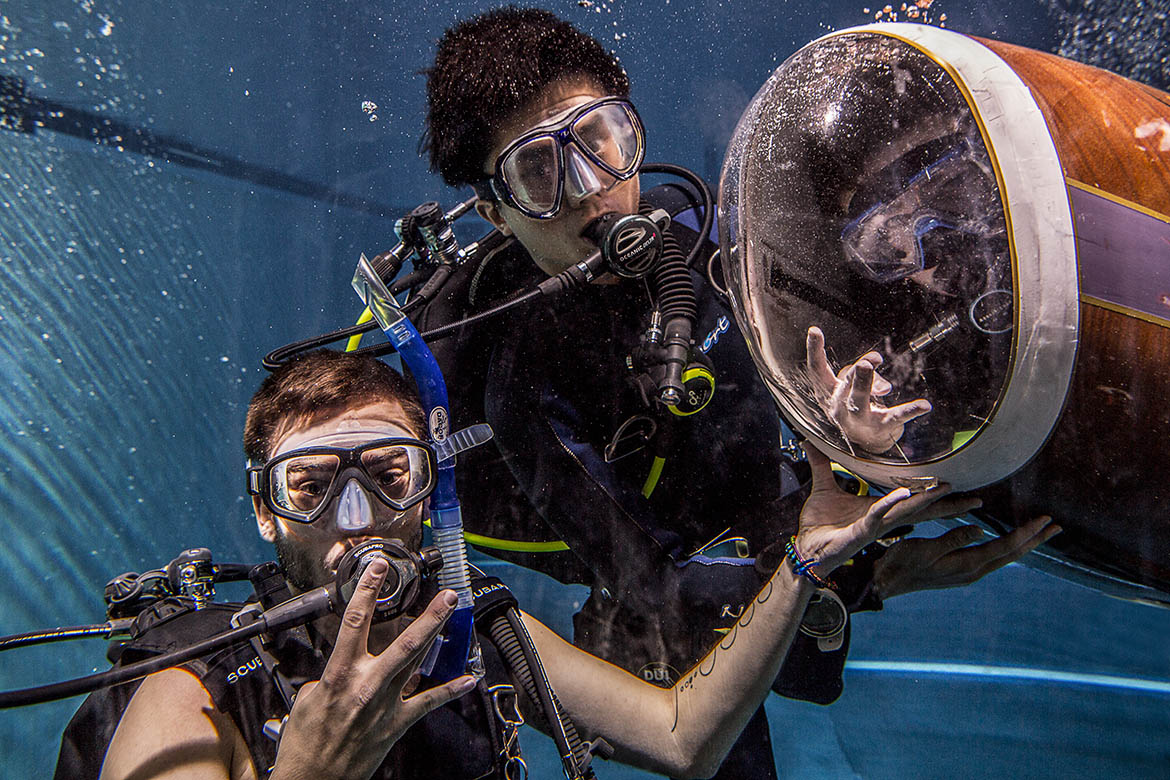 As far as self-powered submarines go, Knotty Dawg is a work of art: 15 feet long, its hull is handcrafted from western red cedar and finished with an African mahogany wood veneer. Standing next to it, one can’t help but touch its smooth surface, trace the wood grains and admire the intricate design details.

But for the vessel’s creators — members of the UW Human Powered Sub team (HPS) — it’s more than just a visual wonder. It’s an engineering accomplishment, one that paid off this summer at the International Submarine Races (ISR) in Potomac, Maryland, where the team won first place in the fastest two-person sub competition with a speed of 3.27 knots.

A return to tradition 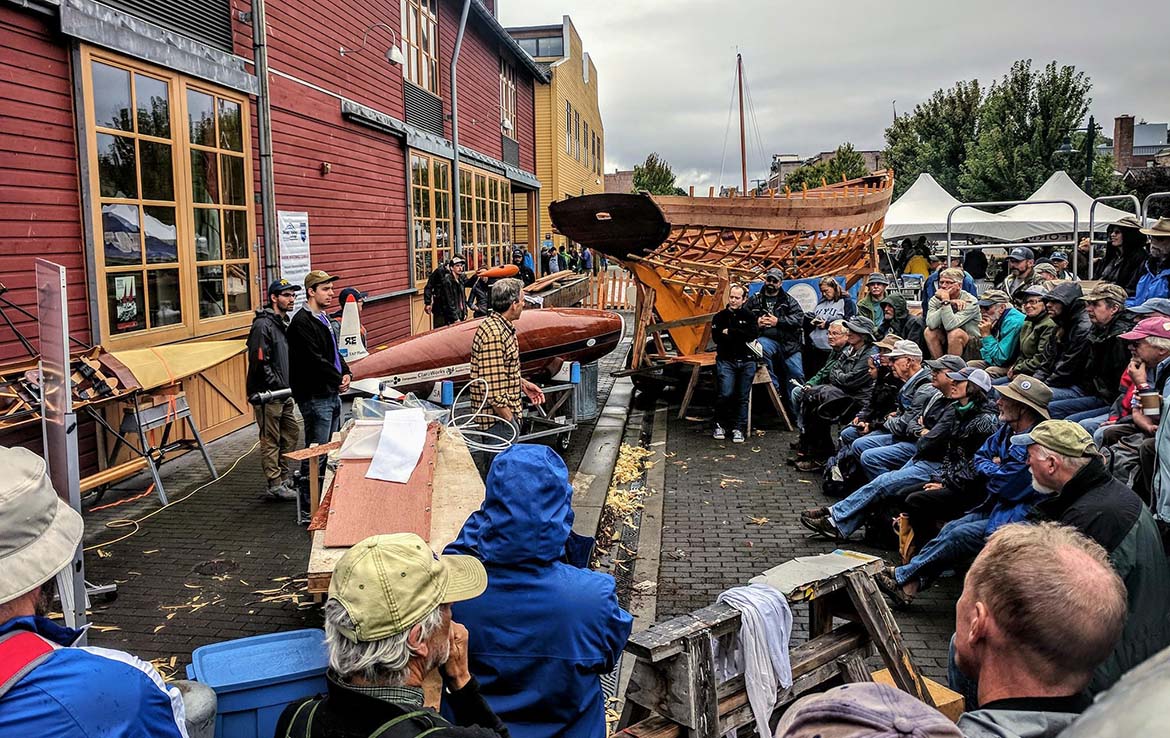 “This sub has been a return to tradition for us,” says Andrew Farrell, a mechanical engineering senior and one of this year’s HPS team captains.

UW students started competing human powered submarines in 1989. They built their first hull from wood, but then moved on to foam, plastics, carbon fiber and other composites — materials used by most teams in the competition.

The idea to revisit wood as a medium came from former HPS captain Bentley Altizer, according to Farrell.

“Bentley wanted to build something that would look great, give us a competitive edge and honor the heritage of wooden boatbuilding,” he explains.

Last year the team reached out to the Northwest School of Wooden Boatbuilding in Port Hadlock, Washington, an institution that teaches traditional and contemporary wooden boatbuilding skills. The school’s boat builders were excited to learn about HPS’s project and began working with the students to design and build the hull.

“The opportunity to partner with artisan boat builders was an experience I never expected to have as an engineering student,” says aeronautics and astronautics major Ahrif McKee, who is serving alongside Farrell as HPS co-captain this year. “I think that’s what makes our team unique — everything we do tends to be unexpected, curious and challenging.”

“That’s the nature of the competition, and it’s what drives us,” adds Farrell.

We were impressed not only by the UW team’s design this year but also by the fact that they’d collaborated with a boatbuilding school. Technical partnerships can present their own challenges, and the team demonstrated a willingness to dive in and make it worthwhile for everyone. 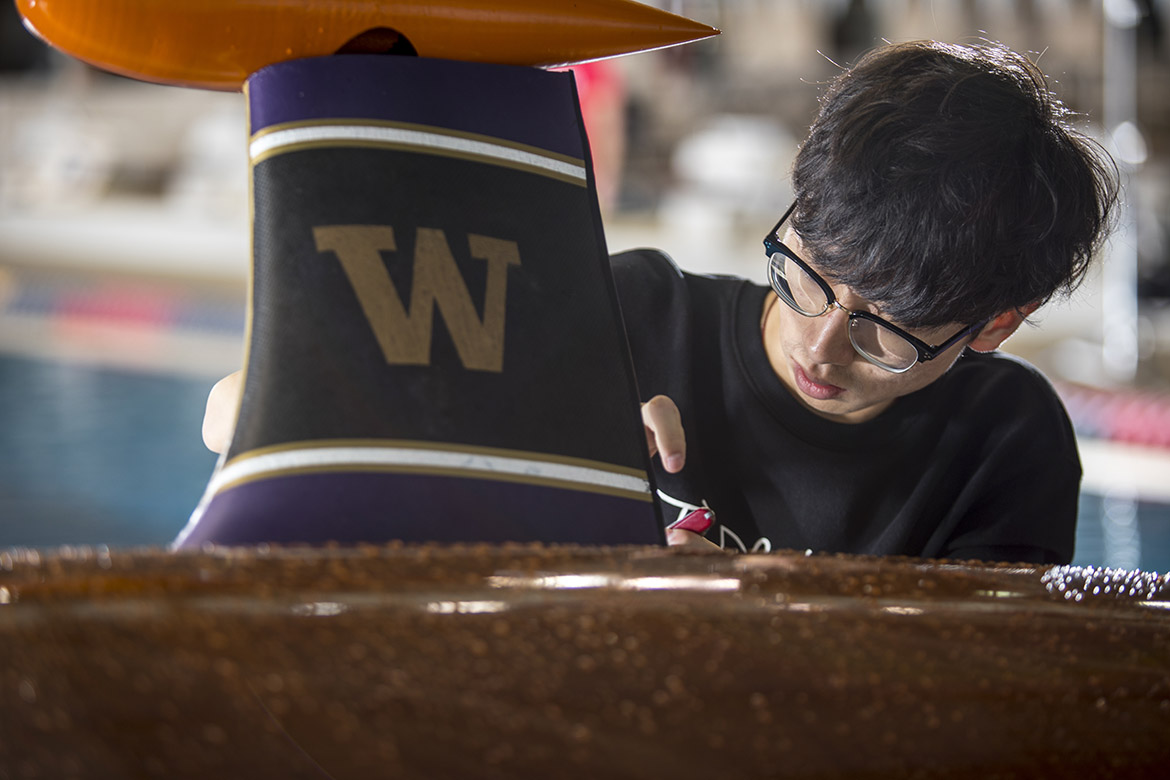 UW’s HPS team consists of approximately 40 students, mostly from mechanical engineering and aeronautics and astronautics, though some come from backgrounds like electrical engineering, business and psychology.

“There’s a lot of overlap between the physics of building a submarine and building an airplane,” explains McKee. “It’s all about fluid dynamics — the way an object moves through a fluid. We tend to think of fluids as liquids, but air is also a fluid so a lot of the same principles apply.”

Beyond the annual ISR summer competition, human powered subs don’t really serve a purpose. No one uses them in industry, they aren’t a practical mode of transportation, and they can be an expensive hobby. Yet for those eager for an engineering challenge, they’re perfect. 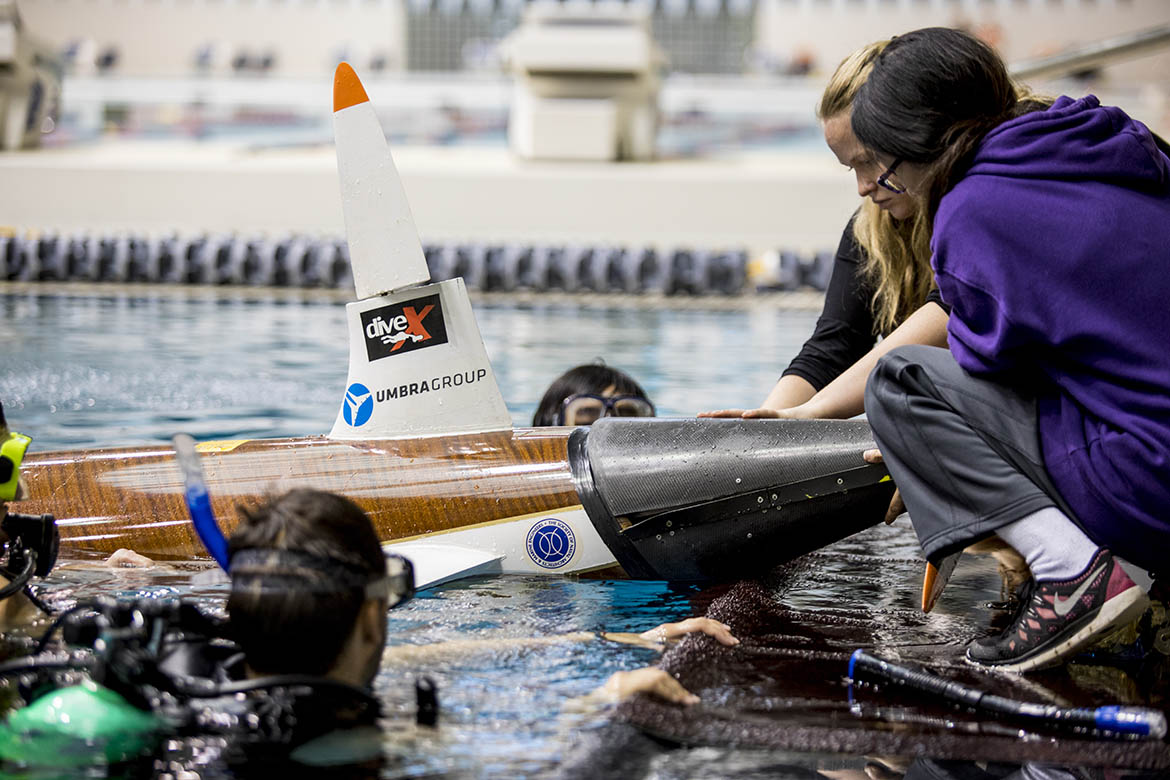 The dive team waits for the surface support team to secure carbon fiber tailcone panels to the sub. 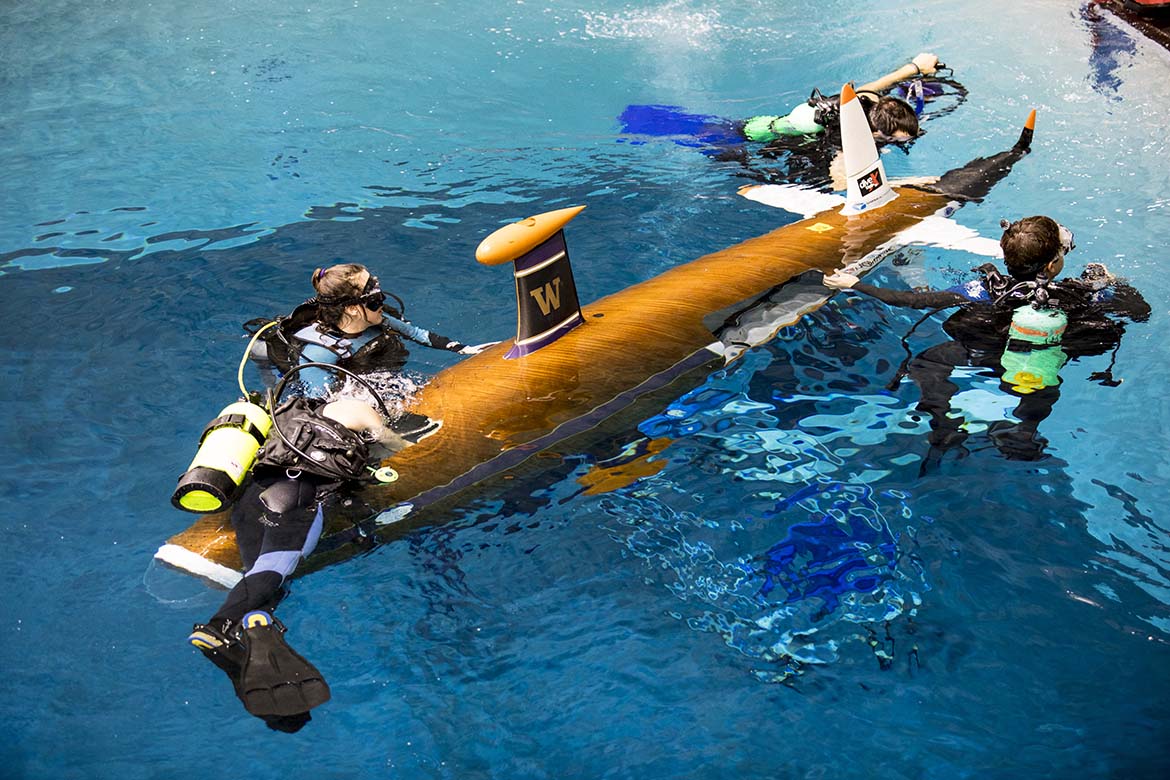 A team member inspects Knotty Dawg’s controls before the pilot squeezes in. 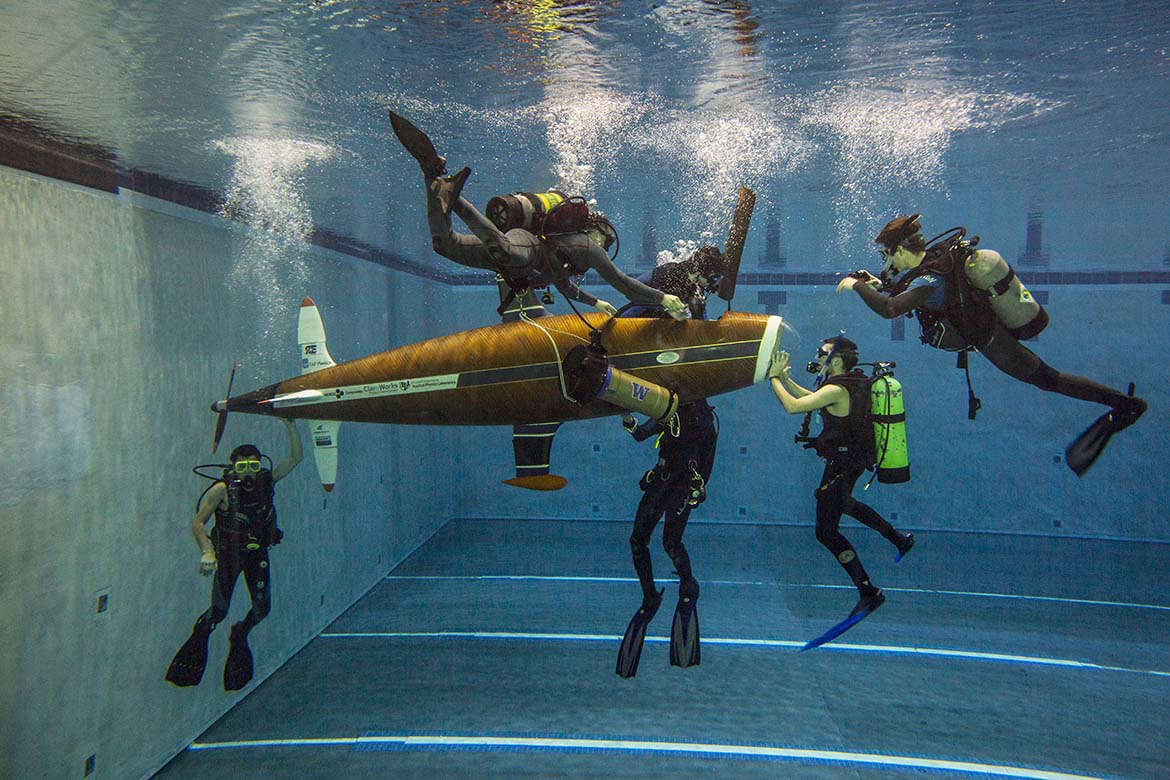 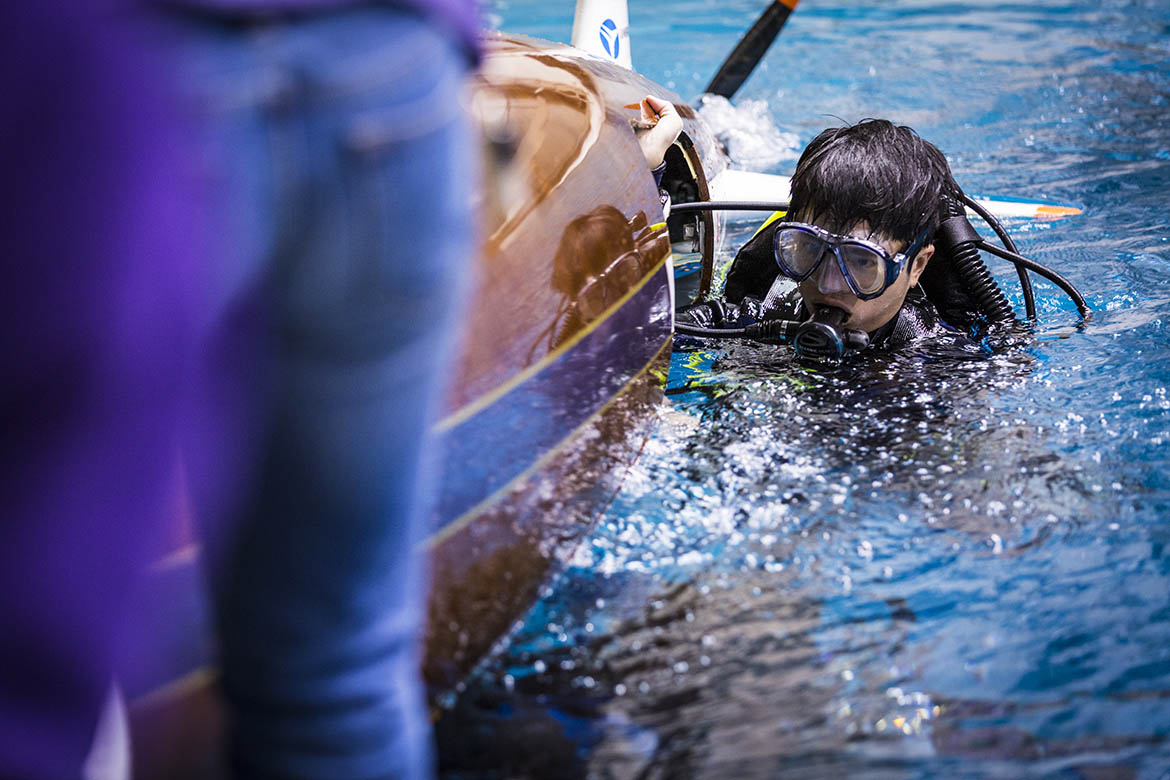 After racing, Knotty Dawg is lifted out of the water and returned to the surface support team.

Without solid design and construction, it doesn’t really matter how fast your pilots are — they’re not going to be able to perform well if they don’t have a top-notch sub. 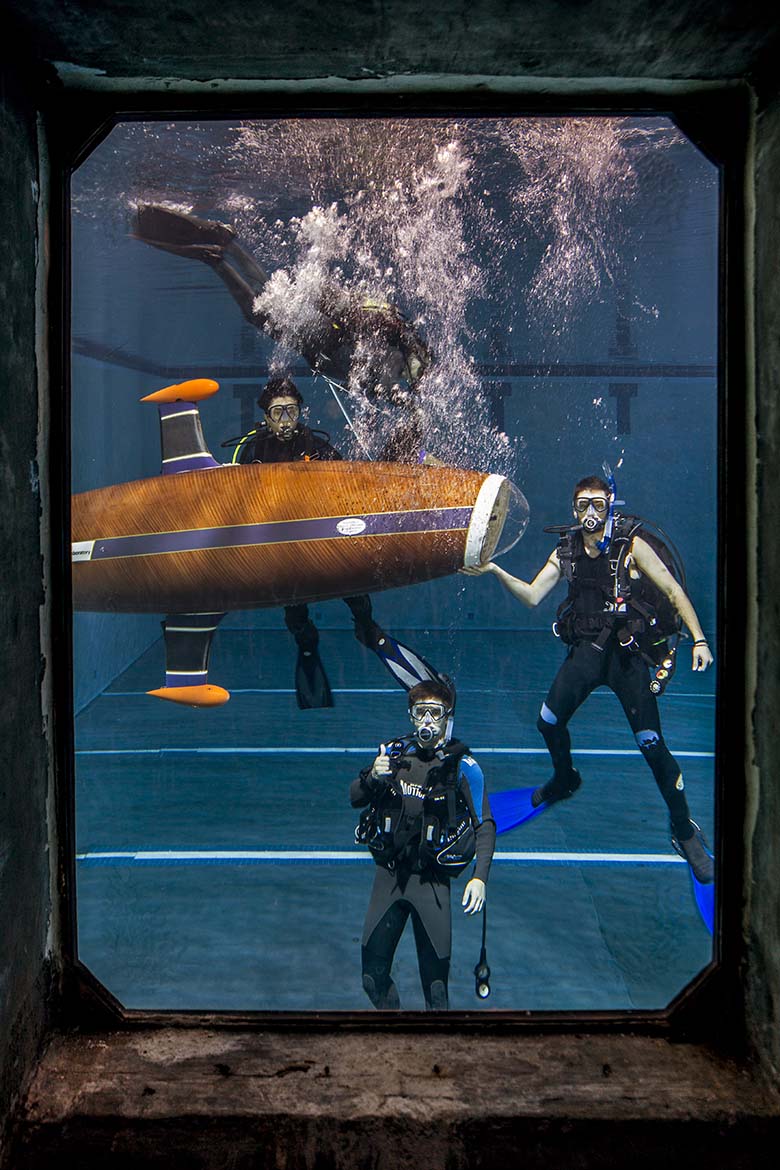 The sub isn’t watertight, so pilots and dive team members must be scuba-certified.

In even years, competitions are held at an aquatic center in Gosport, England, and in odd years, they take place at the Naval Surface Warfare Center, Carderock Division, a U.S. Navy complex near Washington, D.C. The UW team uses the same hull for two years, modifying the controls and drive mechanics so it will perform well in both locations.

The different pools present unique challenges. “Carderock’s pool is one of the longest in the world — nearly 2,000 feet long and 22 feet deep — so we’re able to focus on top speed in a straight line, while the Gosport pool is shorter and wider, so challenges there include a lot of turning, winding courses and obstacles,” explains McKee.

The subs have either one or two pilots, who squeeze inside, laying on their stomachs, and use their hands to steer, feet to pedal, and a scuba regulator to breathe. The submarines aren’t watertight, so pilots must be scuba-certified. In a two-pilot sub, like Knotty Dawg, one pilot faces forward while the other faces backward, their feet meeting in the middle.

“It’s definitely not for the claustrophobic,” says Farrell.

While top speed is the goal at competition, both Farrell and McKee agree that good engineering is what really matters. Most all subs break or require immediate on-site fixes and just reaching the finish line can be a major challenge; fewer than half the subs actually make it across.

“Without solid design and construction, it doesn’t really matter how fast your pilots are – they’re not going to be able to perform well if they don’t have a top-notch sub,” says Farrell.

“When the UW team presented their sub at ISR this year, I think every judge’s initial reaction was, ‘Wow, what a beautiful boat!’ That was certainly mine,” says Heidemarie Stefanyshyn-Piper. A retired naval officer and former NASA astronaut, Stefanyshyn-Piper served as commander of NSWC Carderock from 2011 to 2015. During that time, she began volunteering as a competition judge.

“We were impressed not only by the UW team’s design this year but also by the fact that they’d collaborated with a boatbuilding school,” she says. “Technical partnerships can present their own challenges, and the team demonstrated a willingness to dive in and make it worthwhile for everyone.”

Stefanyshyn-Piper says that the U.S. Navy is eager to support competitions like ISR because they give engineering students an opportunity to put theory into practice.

Plus, the more engineering students interested in naval architecture, aerospace and marine engineering, the better for industry, she adds. 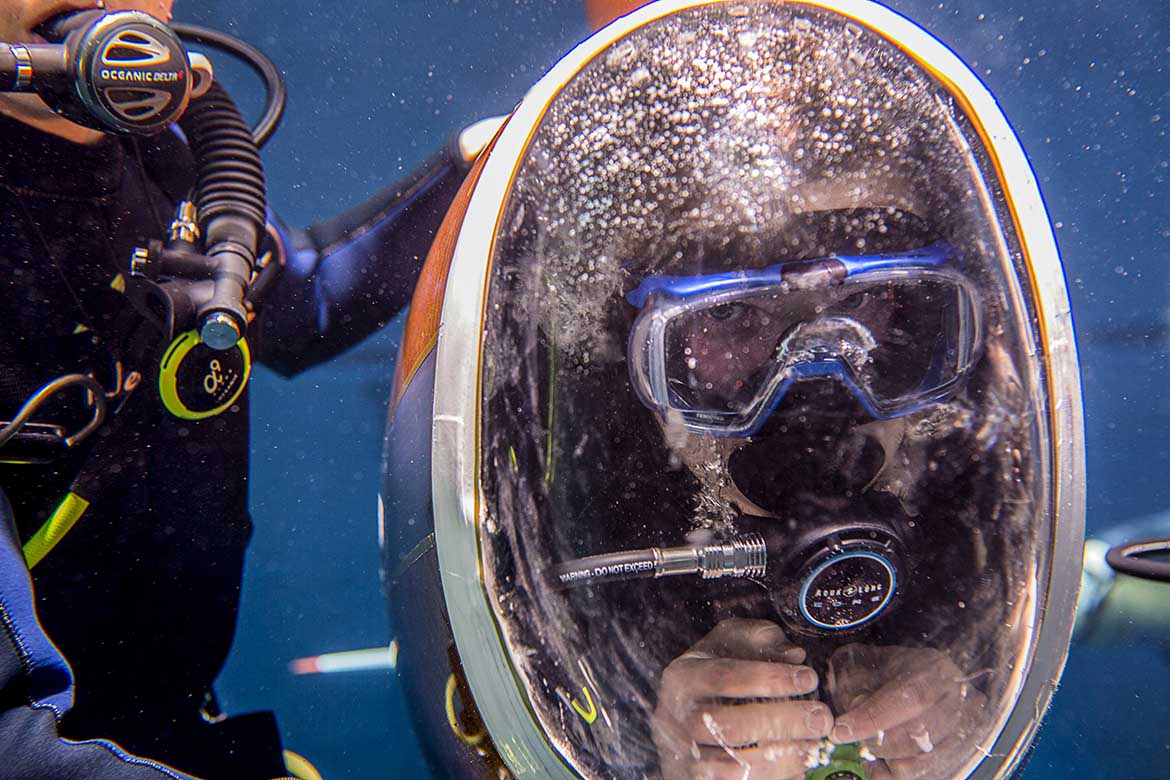 It’s a tight squeeze inside! 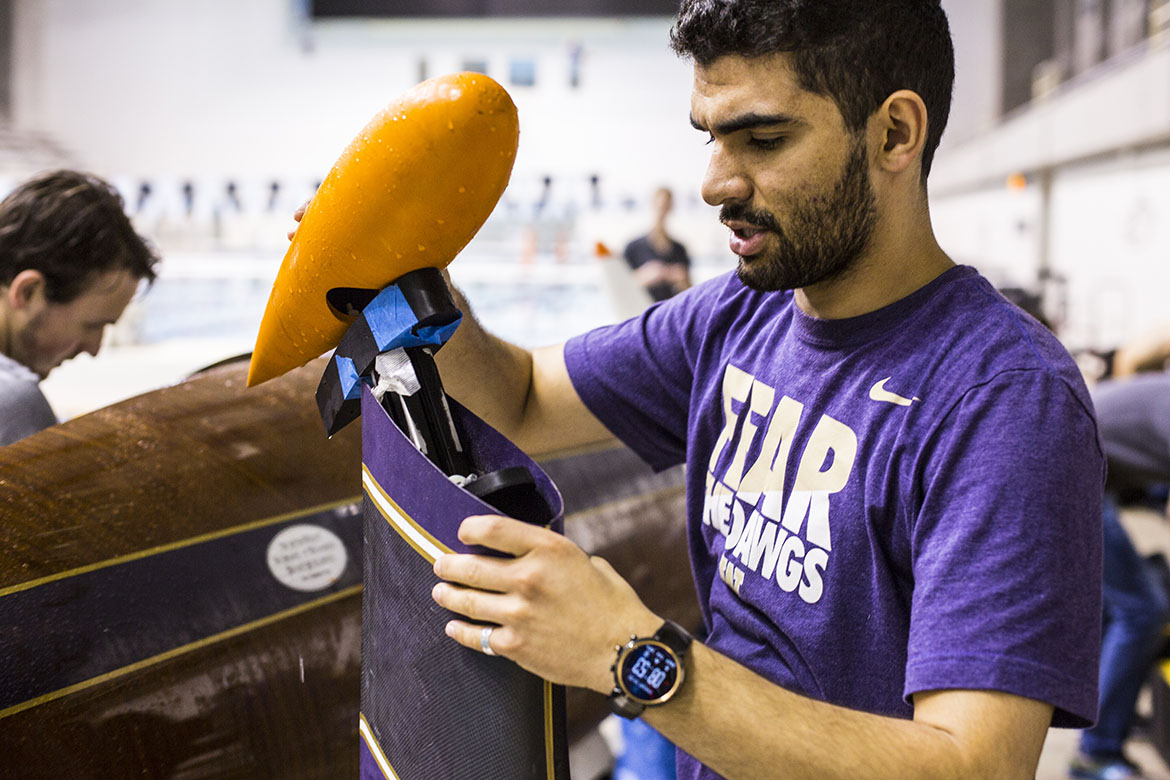 “Being on the team is about so much more than just going to competition,” says co-captain Ahrif McKee. “We get to develop hands-on skills, learn how to use all sorts of tools and apply what we’ve learned in our classes to an actual physical project.”

This year, HPS will alter Knotty Dawg’s mechanics and controls in preparation for taking it to England next summer. They will also start working on the design for a new hull, which will debut at competition in summer 2019. They haven’t yet decided if they’ll stick with wood or try a new material.

But that creativity and exploration is part of the fun.

“Being on the team is about so much more than just going to competition,” McKee explains. “We get to develop hands-on skills, like manufacturing and assembly, learn how to use all sorts of tools in Mechanical Engineering’s prototype shops, and apply what we’ve learned in our classes — things like CAD, finite element analysis and computational fluid dynamics — to an actual physical project.”

As for the design and construction of their next sub?

“Everyone will just have to follow us online to find out what we come up with,” says McKee. “Or better yet, join the team and take part in the process!”