“From the nose to the tail, we rip the skin off of an airplane to show students what’s inside.” – ME associate professor Nathan Sniadecki 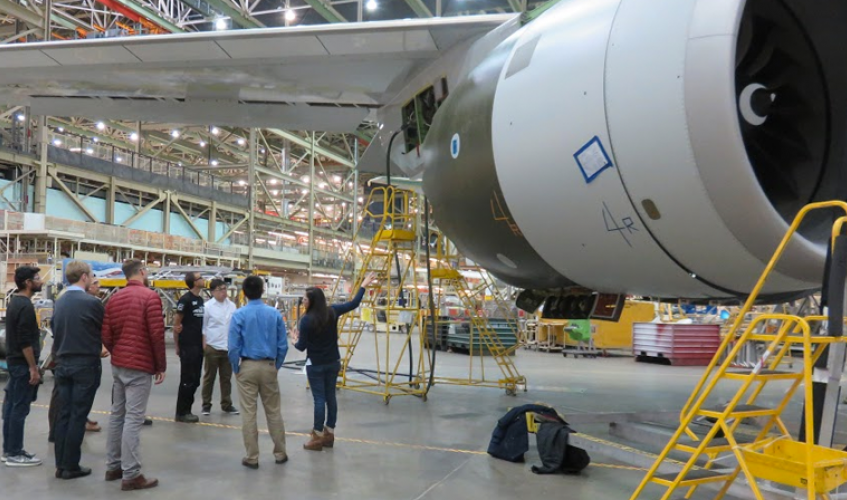 In addition to classroom lectures, demos and projects, students visit the Boeing factory floor in Everett.

Siqi Chen has never won the lottery, but she imagines it would feel similar to finding out about ME 498/599, Mechanical Engineering (ME)’s “Structural Engineering in Commercial Aircraft” class.

“In addition to focusing on airplane design structures — my favorite subject — the class is taught by engineers from The Boeing Company, who are actively doing the work we discuss in class,” the aeronautics and astronautics (A&A) senior says. “How often do you get that kind of opportunity?”

Very rarely, if ever, according to ME associate professor Nathan Sniadecki. Since 2015, he and ME doctoral student Rishi Pahuja have worked with Boeing engineers to develop the course, which gives students an overview of the different structural subsections of a commercial airplane.

“From the nose to the tail, we rip the skin off of an airplane to show students what’s inside,” he says.

But understanding the engineering that goes into designing airplanes is just part of the class.

“In aircraft design, professional engineers have to consider factors that don’t arise in academic engineering classes: costs, customer satisfaction, airplane wear and tear, FAA regulations and safety concerns,” Sniadecki explains. “We want students to realize that engineering is not just numbers and calculations – something might look good on paper but, in the real world, that’s not enough.” 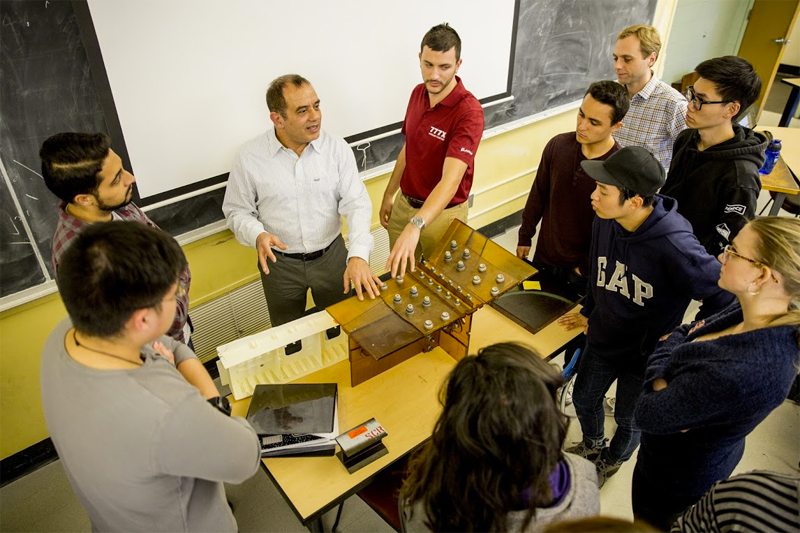 Farzad Zafari, who received his bachelor’s (’82), master’s (’88) and doctoral (’97) degrees from ME, is one of several Boeing structural engineers who participate on a teaching team.

The class is built around industry insight — exposing students to what goes on in the workforce, what engineering concepts Boeing teams use and apply in their daily activities, how they navigate industry policies and procedures — to help students better understand the multi-layered nature of engineering.

“After joining ME’s external advisory board in 2013, I talked with ME Chair Per Reinhall about ways we could deepen Boeing’s relationship with the department,” says Boeing Structures Engineering Director and ME alumnus Steve Chisholm, ’86. “Many of our engineers are ME graduates, and it seemed like there was more we could do to invest in our ties to the department.”

Initially ME and Boeing partnered on a lecture series, in which Boeing engineers gave talks on campus. That worked well, Chisholm says, but it still didn’t seem like enough. 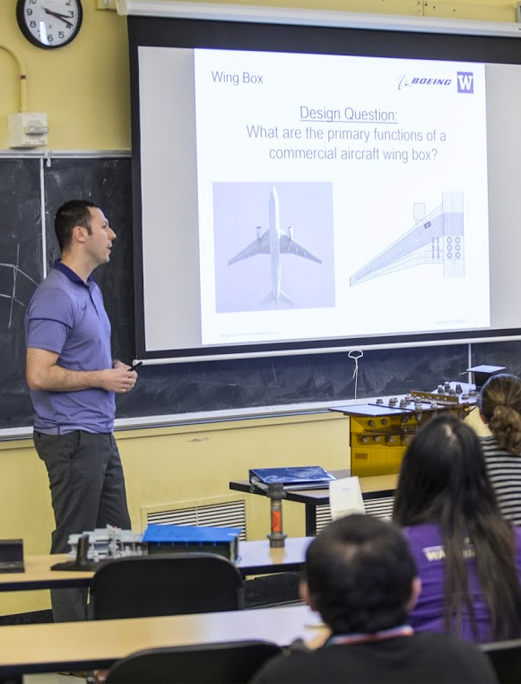 Boeing engineer Nick Craft, who received his bachelor’s in industrial and systems engineering (’07) and master’s in aerospace engineering (’13), teaches about the functions of commercial aircraft wing box.

With the help of Sniadecki and Boeing engineering manager Michelle Carey, BSME ‘01, they evolved the lecture series into a quarter-long course, ME 498/599. First offered in 2016, it has met every academic year since then.

The course consists of about 30 upper-level undergraduate and graduate students; two-thirds are ME students and a third are A&A to replicate the composition of a typical Boeing structural engineering team. Each class meeting is led by a different Boeing engineering teaching team with expertise in one of the many structural subsections of a plane: propulsion, wing box, fuselage, empennage, doors and landing gear, to name a few.

“About 70% of the instructors bleed Husky purple, and they jump at the chance to share their knowledge, reconnect with their alma mater, and answer students’ questions about what engineering is like after graduation,” says Carey.

While ME faculty help plan the course and prepare the Boeing engineers for the front of the classroom, the engineers develop all of the curriculum and homework assignments.

“It’s a lot of material, and it’s all been created from scratch,” Chisholm explains. “When printed, it’s thicker than any textbook I ever bought in school.”

“Boeing engineers are passing down 100+ years of aerospace expertise to our students. That’s so special.”

In addition to instructor-led classroom lectures, demos and projects, students visit Boeing facilities, including the factory floor in Everett and the Thompson site, where they tour the hull of a retired 737.

Expanding the future of aerospace

New to the teaching team this year, ME assistant professor Sawyer Fuller hopes students expand their appreciation of the industry.

“To think about how far airplane technology has come in 120 years is impressive,” he says. “Boeing engineers are passing down 100+ years of aerospace expertise to our students. That’s so special.” 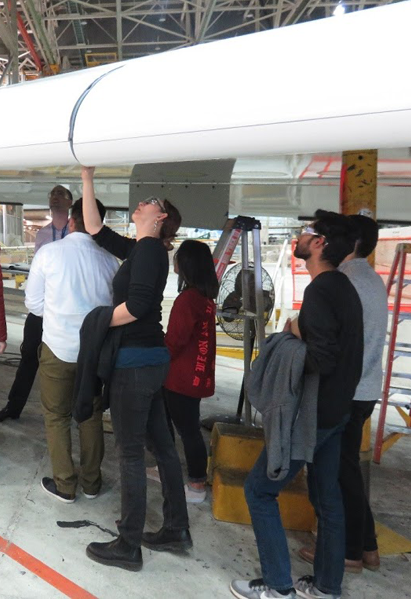 The class is structured around industry insight to help students better understand the multi-layered nature of engineering.

Kenny Huynh, BSME ’17, can attest to this. A first-year Boeing mechanical design engineer, he works on Boeing’s 787 door design team. As a ME student he participated in the first class cohort and also held a Boeing internship. This year he served as one of the course instructors.

“I was thrilled when Wayne Peterson, BSME ‘85, one of my Boeing mentors, invited me to join the doors and fuselage teaching team,” he says. “Boeing’s senior engineers are a wealth of expert knowledge, and as a young professional I appreciate any opportunity to learn from them. To now be a part of that knowledge flow to students — some who may be future Boeing engineers — is really neat.”

While a student in the class, Huynh says that the tours were impressive, but what he remembers most were the lecture slides prepared by the instructors.

“I really enjoyed going through those slides on my bus ride home after class,” he says. “I couldn’t believe that, as a student, I had access to such rich knowledge!”

Now that he’s an instructor, he wants to pass on this excitement to others.

"This class helped me prepare to work at Boeing," he says. "It can do the same for them, too." 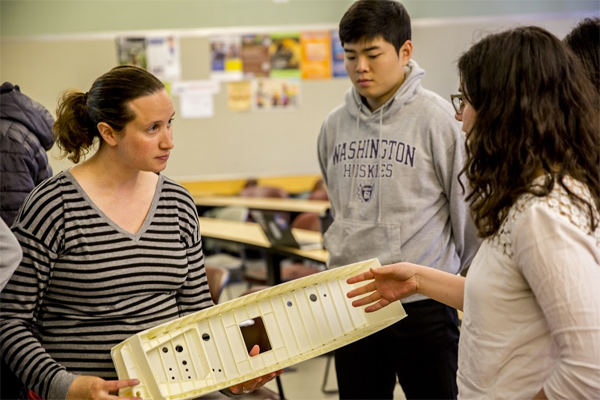 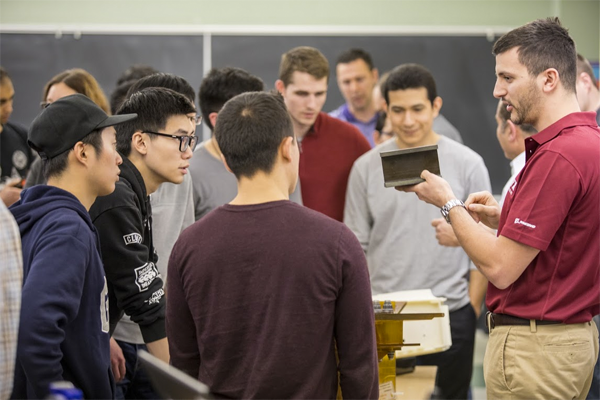 Boeing engineer Gianmarco Tartaglione, who holds bachelor’s (’11) and master’s (’16) degrees from A&A, shares a composite member of the wing box structure with students.