ME postdoctoral researcher Lucas Ting has won the 2013-2014 Western Association of Graduate Schools (WAGS) and University Microfilms International (UMI) Innovation in Technology award for his PhD dissertation. This award is intended to recognize a thesis or dissertation for the development of an innovative technology and its utilization for the creative solution of a major problem. Dr. Ting’s research investigates how endothelial cells, while line the inside of blood vessels and platelets, react to physiological & pathological fluid forces by measuring changes in the cells' mechanical properties, adding insight into how issues such as atherosclerosis & coagulopathy develop.

The UW microgravity team, the AstroDawgs, has been accepted into the 2014 NASA Microgravity University Program. This program provides a unique academic experience for undergraduate students to successfully propose, design, fabricate, fly and evaluate a reduced gravity experiment of their choice. The AstroDawgs will pursue an experiment to characterize the impact of different conical geometries on lunar regolith and the resulting dust cloud in a microgravity environment, in order to find a geometry that will produce the lowest dust cloud.

Brian Fabien, ME Professor and faculty advisor for the EcoCAR2 project, has been awarded the DOE Applied Automotive Engineering Fellowship in recognition of his contributions to the AVTC Applied Automotive Engineering Curriculum Project (AAECP), a project designed to leverage the knowledge and expertise of EcoCAR 2 faculty advisors to create a body of practical automotive engineering knowledge that is gained through hands-on vehicle competitions. The newly established DOE fellowship is applicable only to EcoCAR2 lead faculty advisors. It includes a $10,000 award that Dr. Fabien may use towards UW’s AVTC program. Congratulations, Dr. Fabien!

Recent ME grad Thomas Larson was awarded 3rd place for his presentation on Cell Phone Microscopy at the ASME "Old Guard" Oral Presentation Competition during the ASME International Mechanical Engineering Congress & Exposition (IMECE) in San Diego on November 16th. Congratulations, Thomas! Click here to read more on the exciting work that Thomas has been doing to develop a simple but powerful microscope for smartphones.

UW’s EcoCAR 2 team is in the third and final year of a nationwide college of engineering student challenge to re-engineer a Chevy Malibu to reduce its fuel consumption and limit greenhouse gas emissions. The competition, developed by the U.S. Department of Energy and General Motors, aims to educate and produce the next generation of automotive engineers, or as professor of Mechanical Engineering and EcoCar 2 faculty advisor Brian Fabien says, the people who are going to save us.

Assistant Professor of Mechanical Engineering Kat Steele is featured in this Seattle Times article about the changing culture for women in engineering. Professor Steele says that the number of women on the faculty played a big role in her decision to work at the UW. UW has seen steady growth in the number of women in engineering and science faculty positions since it received a national grant to help boost the numbers.

Mechanical Engineering PhD student Jeff Campbell is researching how the shape of terrain park jumps determines how people end up in the air and how often they get unintentionally inverted. Currently, Campbell says, ski jumps are built with a disregard for biomechanics. He is working with Guidance Engineering, a Seattle based company, to track the body mechanics of ski jumpers. They plan to use their findings to make ski jumps safer by providing better design tools to terrain park crews.

Alaska Airlines has adopted advanced plastic cups from UW start-up MicroGREEN Polymers, Inc. for its in-flight coffee service, replacing paper cups from China. The cups are expected to cost one third less, weigh half as much, insulate twice as well, and will be completely recyclable. MicroGREEN was cofounded by Krishna Nadella as a UW graduate student in the lab of Vipin Kumar, a UW professor of mechanical engineering. See also: C4C Impact Investigation

The goal: a high-efficiency, low-emissions cookstove that is affordable and attractive to families around the world who cook over a flame each day. UW mechanical engineers Jonathan Posner and John Kramlich and their team, with support from the US Department of Energy, will pursue that goal by designing a stove for East African communities and creating software that helps other stove designers create efficient designs.

ME professor Eric Seibel is leading efforts to adapt the scanning fiber endoscope he developed for the narrow bile ducts of the liver to be used to visualize the brain during surgery. Also see: Seibel's video demonstration

Recent ME grad Thomas Larson has launched a campaign to develop a simple but powerful microscope for smartphones. He was asking for $5000, but funding has snowballed to more than $90,000! Larson conceptualized the smartphone accessory in the 2013 Business Plan Competition and Nate Sniadecki's Cell Biomechanics lab. At the UW last year, Larson won 3rd place at the UW SEBA Science and Technology Showcases and 1st Place for Best Technical Presentation at Pacific District D of ASME and 1st Place for the Student Presentation Competition at Western Washington section of ASME.

Associate Professor Joyce Cooper has been named a 2013 UW Presidential Entrepreneurial Faculty Fellow, a prestigious program in which the fellows serve two-year terms as mentors to other UW faculty, researchers and staff with entrepreneurial aspirations. Professor Cooper has an accomplished record of working with industry, and brings real world problems to bear in her research and teaching. Congratulations, Professor Cooper! Read more...

ME Professor Dayong Gao (back row, center) was selected as one of the nineteen well-respected American engineers, scientists and executives who received the national honors in four categories of "2013 Asian-American Engineer of the Year (AAEOY) Award," as a part of the 2013 National Engineers Week program. Congratulation letters from US President Obama, government officials, and congressional leaders were presented during the 2013 AAEOY Award Ceremony.
See also: Frozen body: Can we return from the dead?, BBC Science

For the second year, Washington Open Object Fabricators (WOOF) entered a 3-D printed boat in this year's Seafair Milk Carton Derby. The new boat represents a better understanding of how to print with recycled plastic, said Dana Henshaw, a student and director of operations for WOOF. The boat required fewer recycled bottles. It was printed over 11 hours instead of 19 hours, by using a different nozzle that extruded a thicker line of plastic. "We fail a lot, but we learn a lot," said student Mark Hanson, who thinks in the future every neighborhood might include a couple of 3-D printing shops stocked with barrels of the raw plastic needed to make almost anything.

Lucas Ting and Shirin Feghhi, shown with ME Associate Professor and advisor Nathan Sniadecki, both took home 1st place awards for presenting their papers at the 2013 ASME Summer Bioengineering Conference. Out of 180 abstracts submitted for the PhD competition, 36 finalists were divided into six sessions and Lucas and Shirin each won their respective sessions.

The UW Formula Motorsports team clinched the overall win in a field of nearly 80 teams at the Formula Society of Automotive Engineers competition held June 19-22 in Lincoln, Neb. The overall win is a first for the student-run UW team, now in its 24th year. In the new electric car category, the UW team placed second overall out of 20 registered teams.

Professor Ramulu Mamidala received the 2013 ASEE Isadore T. Davis Award in recognition of his spirit and leadership in the collaborative efforts of engineering or engineering technology education with industry. Prof. Ramulu was recognized for his exemplary collaborative efforts motivated working engineers to pursue doctoral studies and he is a leader in using emerging technologies in distance education to reach non-traditional students.

American CryoStem Corporation welcomed ME professor Dayong Gao to its Medical & Scientific Advisory Board. Dr. Gao will provide guidance and enhancement for the company's development and commercialization efforts.

In an article about the proliferation of 3-D printing, ME professor Mark Ganter lauds the WOOF team and the ecological benefits of 3-D printing. "If you knew you could 3-D-print a boat out of garbage and knew it meant that trees wouldn't have to get cut down, isn't that worth doing?" Ganter said.
See also: Saved by the printer! from The Why Files

Sounds Of The Sea: Stones Clanging

PhD student Christopher Bassett's research on the noise in Admiralty Inlet of Puget Sound shows that the clacking of pebbles in the seabed, moved by the current, produces a cacophony that drowns out other ocean noises. Bassett says his study is the first to show that currents are capable of regularly moving round objects the size of those seabed pebbles.
See also: InsideScience | Physics Central 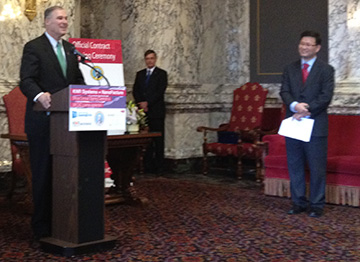 ME Associate Professor Jae-Hyun Chung led the research and collaborated with NanoFacture, a Bellevue Wash. company, to create a device that can extract human DNA from fluid samples in a simpler, more efficient and environmentally friendly way than conventional methods. Chung is pictured with Washington Governor Jay Inslee during a licensing ceremony involving the UW start-up Nano Facture and KNR systems; Chung is the inventor of the involved technology.

Chris Bassett will be recognized for his efforts to combine academic scholarship with social awareness and concern, as well as his contribution to redefining the value of a doctoral degree at the Graduate Council Meeting on May 16. Bassett is mentored by Research Assistant Professor Brian Polagye.

ME Professor Jiangyu Li and researchers at Boston University have discovered that high glucose levels could impair ferroelectricity in the body's connective tissues. "This could be associated with aging and diabetes, which I think gives more importance to the phenomenon," said Li.
Read more: EmaxHealth

Two ME Freshmen to Present Research Findings in D.C. Six UW engineering students — including two ME direct admission students Kasey Acob and David Coven — have the rare opportunity to present their research at a research and innovation conference on March 9. They conducted the research during an NSF research and mentoring program the summer of 2012. Students spent 40 hours per week working on the "Towards zero-energy buildings based on energy-harvesting electrochromic window and thermoelectric systems" EFRI grant with principal investigator and ME professor, Minoru Taya, co-principal investigators, and their graduate students.

Chosen for her background in engineering, experience, and leadership of a company regularly listed as a "best company to work for," Sally Jewell was nominated by President Barack Obama for Secretary of the Interior. If confirmed, Jewell, now president and CEO of REI and a UW regent, will take over a department steeped in controversy over the regulation of oil and gas and will be the steward of hundreds of millions of acres of public lands. More: NY Times | Washington Post

Associate professor Jiangyu Li, working with researchers at Southeast University in China, has discovered a remarkable molecule that shows promise as an organic alternative to today's silicon-based semiconductors. Cheap, flexible, and nontoxic, the molecule is well suited to a wide range of applications in memory, sensing and low-cost energy storage. Findings are published in the journal Science.
See also: C&E News | Xconomy | Science