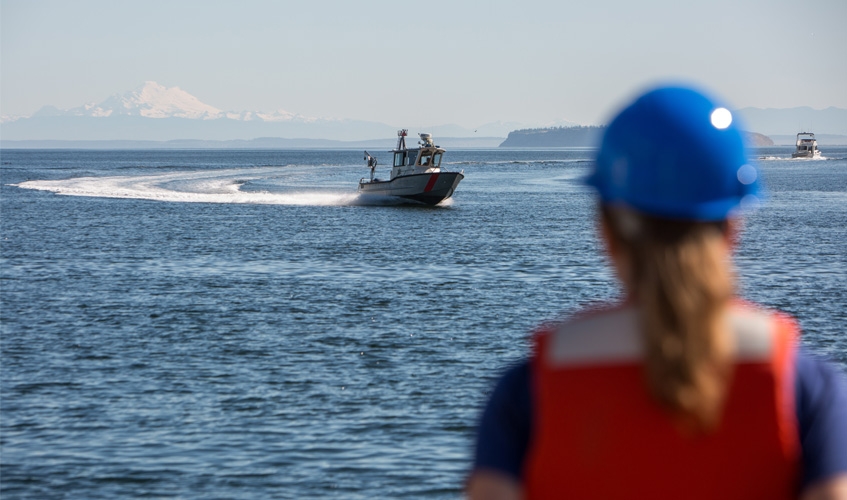 Researchers have long been interested in better understanding how marine energy affects underwater environments, and thanks to UW engineers, they may be a big step closer. Photo by Matt Hagen.

In the context of climate change and energy security, marine energy offers promising ways to expand the global alternative energy market. Marine energy conversion systems harness the power in ocean/tidal currents or surface waves through devices such as tidal turbines and wave energy converters. An emerging market, marine energy has the potential to someday meet a significant percentage of U.S. energy needs, provided the technology is affordable, efficient and accessible to industry.

But do the turbines endanger fish? Do the converters alter the behavior of marine mammals and birds? Is marine life disturbed by underwater noise emitted from such devices? Researchers have long been interested in better understanding how marine energy equipment affects underwater environments. Now, thanks to a team of engineers led by ME associate professor Brian Polagye, they may be a big step closer. 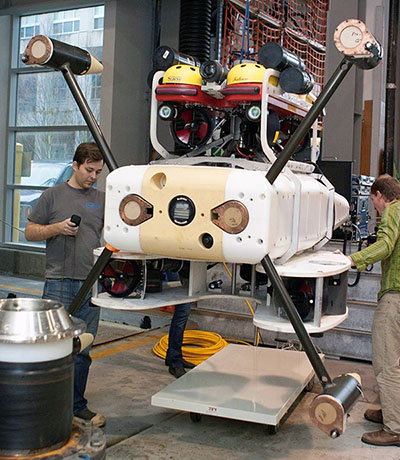 An AMP prior to underwater placement. The monitoring instruments are housed inside the white box in the middle. Photo courtesy of the UW Applied Physics Laboratory.

Working in conjunction with the UW’s Applied Physics Lab (APL), Polagye and several ME engineering students have been designing and building turbines and wave energy converters, tools for monitoring underwater energy sites, and software to process the data collected. Their work takes place as part of the larger Northwest National Marine Renewable Energy Center (NNMREC), a multi-institution organization that develops marine renewable energy technologies through research, education and outreach.

"As renewable energy researchers, we want to find out as much as possible about the interaction between marine life and marine energy converters," explains Polagye. "Yet to do so accurately, we need to avoid altering underwater environments as much as possible."

To study marine environments, researchers rely on recording equipment — sonars, visual cameras, and underwater recorders known as hydrophones — strategically placed at marine energy sites. Polagye’s team has developed multiple systems for such monitoring: Drifting Acoustic Instrumentation Systems (DAISYs) float along the water’s surface and collect acoustic data, swarms of µFloat (pronounced “micro float”) drift underwater, and Adaptable Monitoring Packages (AMPs) mount to the seabed or stationary energy converters and transmit data back to shore. Of these, AMPs are furthest along in development, thanks to sustained support from the U.S. Department of Energy's Water Power Technology Office.

The data collected is a blessing and a curse. AMPs can generate vast quantities of data — so much so that it is nearly impossible to sort through it all to detect specific moments of marine life interaction, such as a seal or a school of fish moving through the field of view. (For example, Polagye estimates a metric ton of hard drives would be needed to store a year's worth of data). Researchers may opt to subsample from this data but they would need to do so to such an extent that the chances of observing an encounter between a marine animal and marine energy converter would be extremely low.

But an ME graduate student has recently devised a way to detect marine life activity that will drastically reduce the volume of data yielded by current monitoring. 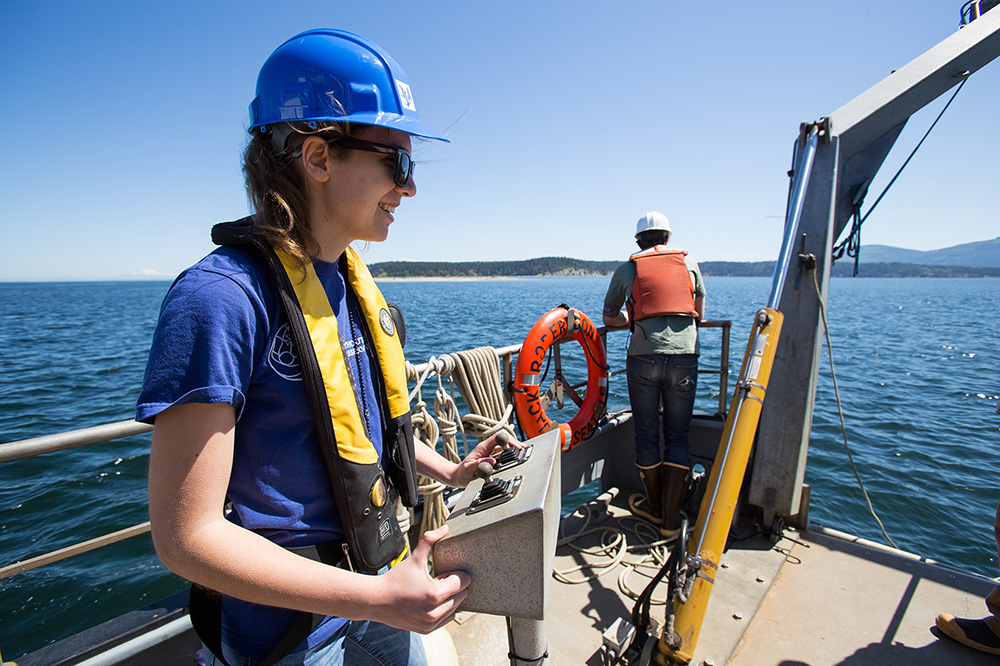 For ME graduate student Emma Cotter, working with NNMREC has been a vital part of her engineering studies. "I get to do software development alongside fieldwork, and I’m helping to shape and inform the direction of this research," she says. Photo by Matt Hagen.

Emma Cotter is one of the engineering students working in Polagye’s lab. Using machine learning, she has created a detection system to determine — in real time — when marine life is present in the areas they are monitoring. This way, researchers can record and study only those moments, drastically reducing the extreme amount of low-value data they would otherwise have to collect. Since this real-time notification generates much less data to store and sort, it will allow researchers to focus on studying environmental effects, rather than curating data.

"It’s difficult to tell what, exactly, we’re seeing when reviewing the data, but by collecting more focused data, we can begin to identify patterns," she explains. "Doing so helps us better assess which sorts of creatures are present, how frequently they appear and how they behave." 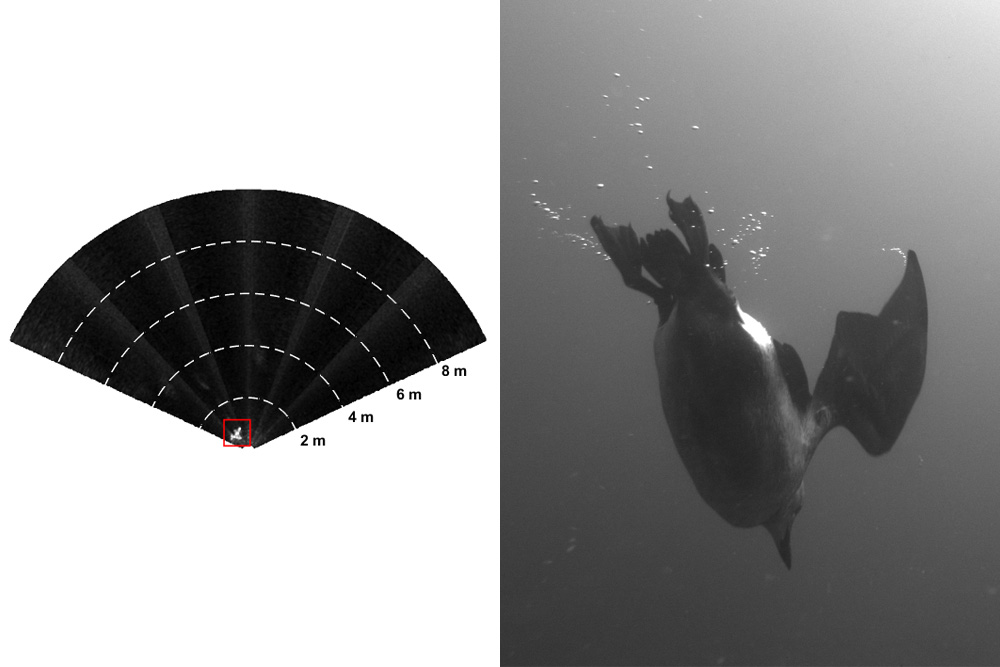 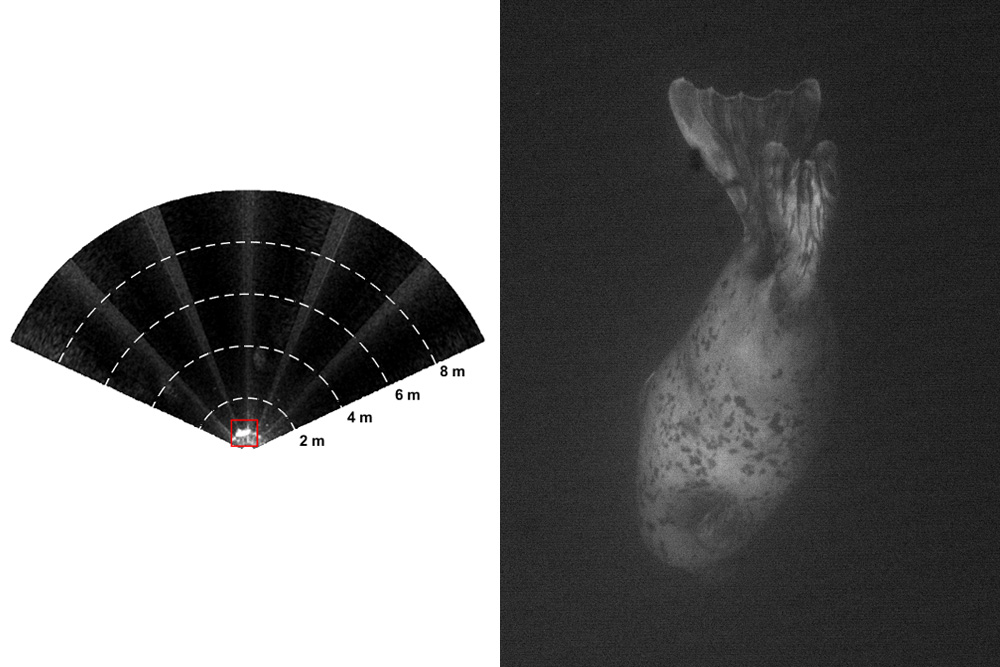 Cotter is now working to enhance the machine learning so that researchers will be able to classify marine life in real-time — not just to detect that something is present, but to determine what that something is.

"For a long time, we’ve focused on hardware and software development, but the advancements that Emma is making with real-time smart data collection and automated classification are key to the refinement of our instrumentation," says James Joslin, an ME alum who received his PhD in 2015 and now works at the APL. As a graduate student, Joslin worked in Polagye’s lab. He is currently heading up efforts to spin out the lab’s environmental monitoring technology via a startup called MarineSitu.

"The renewable energy industry needs this technology to grow, so it’s especially important to make it accessible to turbine developers and other marine energy companies," he explains. 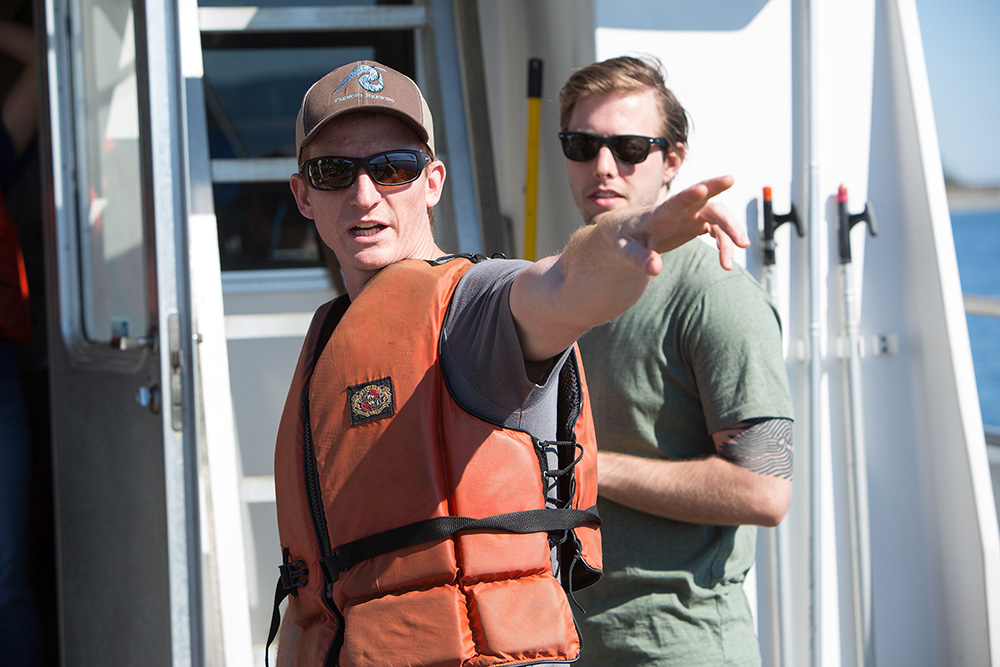 ME alum James Joslin (PhD ’15) is currently heading up efforts to spin out the lab’s environmental monitoring technology via at startup called MarineSitu. Photo by Matt Hagen.

For Joslin, this commercialization challenge presents a unique convergence of experience and interests. Prior to graduate school, he served as chief operating engineer aboard research vessels for the Sea Education Association, supporting marine engineering research programs. He also worked in a Bay Area consulting firm focused on product design and start-up development.

"In returning to grad school, I wanted to get involved with the technical side of renewable energy as well as entrepreneurship, so when I learned about the work of Brian’s lab and NNMREC, I was hooked," he says.

In 2015, Joslin and Cotter first tested the idea to spin out their monitoring technology through the Alaska Airlines Environmental Innovation Challenge, organized by the UW Buerk Center for Entrepreneurship. Not long after, Joslin received a UW CoMotion commercialization fellowship, which has allowed him to pursue business development, while his work at the APL has allowed him to continue working with Polagye, Cotter and other NNMREC researchers on technical development.

Joslin is currently focused on building and advancing the network of potential end users outside of academia and even beyond the renewable marine energy market.

"The technology we’re developing is quite flexible," he explains. "Underwater environmental monitoring is not only critical to the development of sustainable marine energy technologies, but it’s also important to port security, the U.S. Navy and other entities concerned with the safety and security of people and infrastructure, not to mention to environmental groups studying underwater sites like coral reefs." 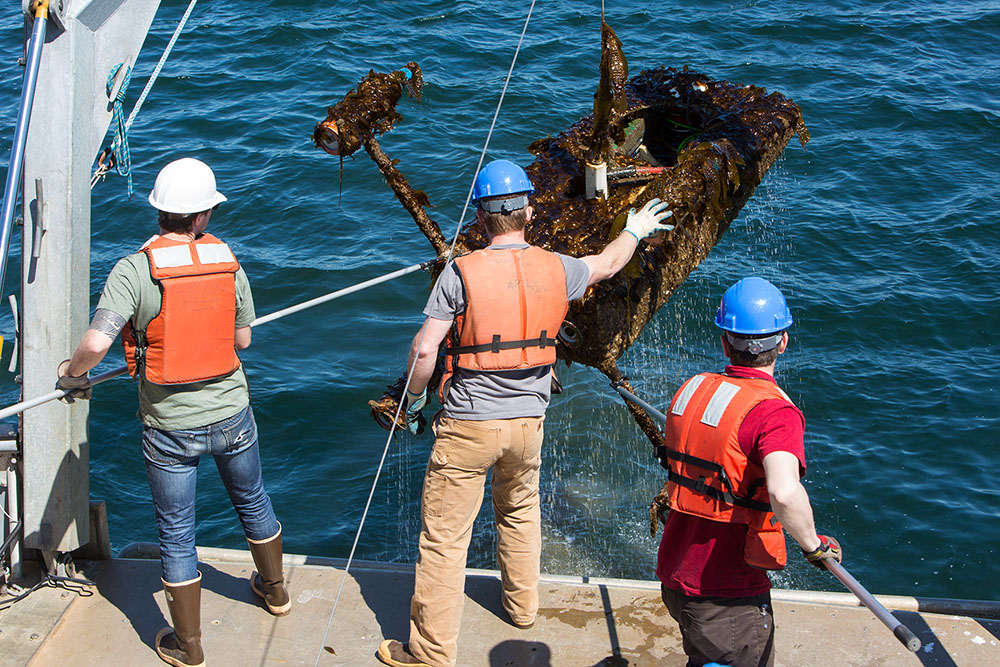 Joslin and others retrieve an AMP from PNNL’s underwater testing site at Sequim, Washington. AMPs can collect data underwater for up to six months. Photo by Matt Hagen.

He says that while the UW is further along than most other academic or commercial entities in developing this technology, there is still work to do. Both he and Cotter are eager to continue testing and refining the AMPs and other monitoring instrumentation. Current test sites include Pacific Northwest National Laboratory at Sequim, Washington, and the U.S. Navy’s Wave Energy Test Site in Kaneohe Bay, Hawai’i. They would like to expand testing to other underwater environments, such as the recently announced Pacific Marine Energy Center South Energy Test Site at Newport, Oregon.

For Cotter, working with NNMREC has been a vital component of her ME graduate studies. "I get to do software development alongside fieldwork, and I’m helping to shape and inform the direction of this research," she says. "Since I was an undergrad, I've been interested in environmental and renewable energy research, so this project has been a unique opportunity to combine those interests and work on something that will have real-world impact."