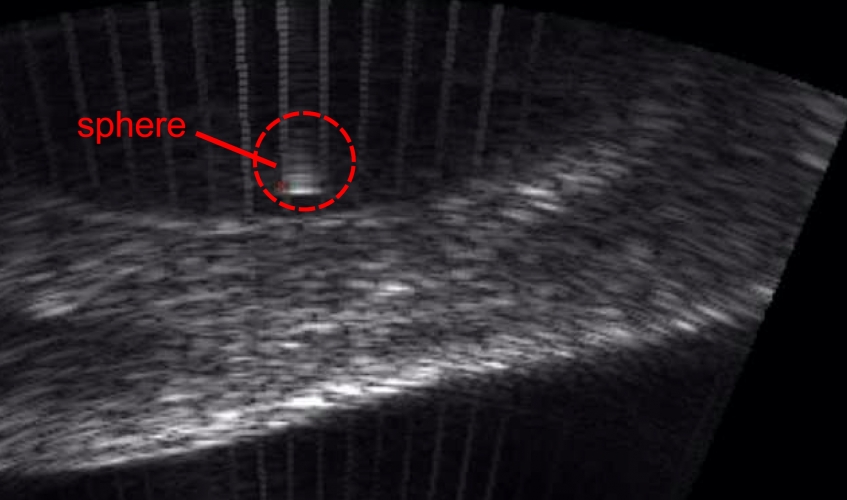 An ultrasound shows the location of a small glass sphere that was navigated noninvasively within a live body using the new “acoustic tweezers” technique. (Mohamed Ghanem / University of Washington)

In a new paper published this week in the Proceedings of the National Academy of Sciences, a team of UW researchers describe a method for using ultrasound to noninvasively control a solid object within a living body. Their technique shows promise for a variety of medical applications, such as steering cameras or manipulating kidney stones to help them pass through the urinary tract.

The research builds on the groundbreaking “optical tweezers” work that was awarded the 2018 Nobel Prize in Physics, but in this case uses acoustic waves instead of light. Compared to current technologies, the method allows much greater control of objects in three dimensions. The research describes how they were able to move a one-eighth-inch glass ball both in water and in the urinary tracts of pigs.

The research team included ME associate professor Michael Bailey – also a senior principal engineer at the UW Applied Physics Laboratory (APL) and an adjunct associate professor of urology at UW Medicine, and Mohamed Ghanem – the paper’s lead author and a postdoctoral scholar at APL. The other members of the team were ME adjunct professor and UW Medicine Department of Urology research assistant professor Adam Maxwell as well as Yak-Nam Wang, Bryan Cunitz, Vera Khokhlova and Oleg Sapozhnikov from UW APL’s Center for Industrial & Medical Ultrasound.