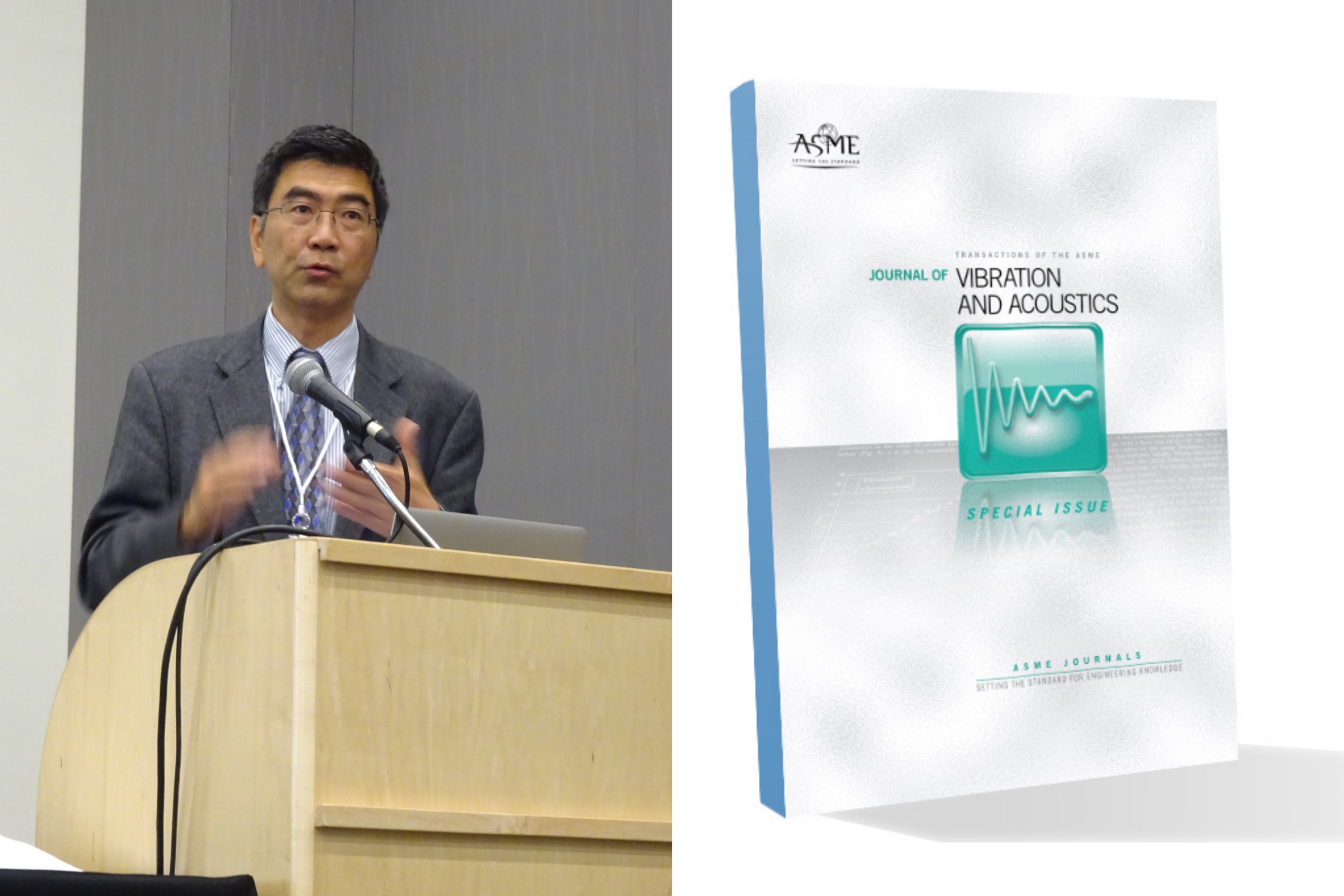 Professor Steve Shen (left) is an expert in vibrations and dynamics. Shen served as editor of the Journal of Vibration and Acoustics from 2014 to 2019. Journal cover image courtesy of ASME

Over the course of just under six years serving as editor for the American Society of Mechanical Engineers (ASME) Journal of Vibrations and Acoustics (JVA), ME professor Steve Shen doubled the impact factor of the journal. Impact factor is a number calculated based on how often research papers in a journal are cited by other papers and is one way to determine the quality of a journal. As anyone who has been in the role of journal editor can tell you, doubling an impact factor is a remarkable accomplishment and one that ASME recognized with a plaque at the end of Shen's tenure.

So how did he do it and what can others learn from his experience?

“I think enthusiasm and commitment are the most important things,” says Shen. “If you don’t have those two things it’s very difficult to achieve what you want to achieve.”

Shen was equipped with both of those traits when he first took on the technical editor role at JVA in March of 2014. Prior to his tenure, the journal had an impact factor of 1.147. Shen says the journal had a good reputation but was considered slow, pushing some scholars to go to competitors. He knew his first priority would be to speed the process up.

To do that, he took a step back to analyze the big picture. JVA got about 550 papers a year with roughly 25 associate editors helping referee them and an acceptance rate typically in the 20-25% range. With an acceptance rate that low, Shen realized one thing he could do is keep bad papers from getting to the reviewers in the first place. Rejecting papers is difficult, but only becomes more difficult the longer you wait. He decided to try to reject around half of the papers right up front.

“It was a very bold move, but also a very costly one on my end,”  says Shen. “I had to read all of the papers as quickly as possible and reject the ones that wouldn't make it through the rest of the process. Of course, sometimes rejections still result in angry authors, so I’d usually provide a paragraph explaining my reasoning. It takes some time to do that, but saves time in the big picture.”

The next thing Shen did was give more attention to the roster of associate editors. It’s a volunteer position, but an important one for running a good journal. Since the papers are divided up, one or two associate editors moving more slowly than others can drag down the entire process.

“I asked for a lot from my associate editors and academics tend to want to do a good job. As a result I realized that sometimes they wouldn't tell me when they had family issues or other things going on,” Shen explains. “I had to have conversations to let the reviewers know it’s okay to ask for help. That asking for help supports the bigger community’s ability to move forward.”

By building stronger relationships with the associate editors, bringing in fresh editors with new energy where some were needed, and even stepping in to take over jurisdiction on papers that were held up for too long, Shen gradually got JVA running more quickly. He cleared the backlog of papers and the review process went from being around 6 months, down to just over 3 months.

“After about two or three years I started to hear from friends that they thought our journal was improving,” remembers Shen.

Then, as he started to report their statistics to the ASME committees, he says it became a positive feedback loop. The news of improvements led to better papers, and those papers led to even better statistics.

By the time Shen finished his tenure as editor in December 2019, the JVA had an impact factor of 2.343, more than double what it was when he took over. ASME gave Shen a plaque in appreciation of his service.

After half of a decade reading hundreds of papers on vibrations and acoustics, Shen remains excited about the field. In 2017, ASME also named Shen winner of the N.O. Myklestad Award for his innovative contributions to vibration engineering. And while he saw trends come and go, he says the most important advances were the fundamental ones.

“If you have a grasp of the fundamentals it’s much easier to apply them to ride the different waves,” explains Shen, who himself contributed to computer hard drive development in the 90s by applying vibrations research to spinning disk drives.

“There’s so much we still don’t understand. When you look at vibrations, they look like they might be very simple but even something like a falling leaf is extremely difficult to describe. If we can really understand those fundamentals, we can look at how you apply them to things that are useful. In our case that includes things like hearing aids, surgical tools, the dynamics of insect flight and improving drone performance.”