By Lyra Fontaine | Photos by Dennis Wise / University of Washington 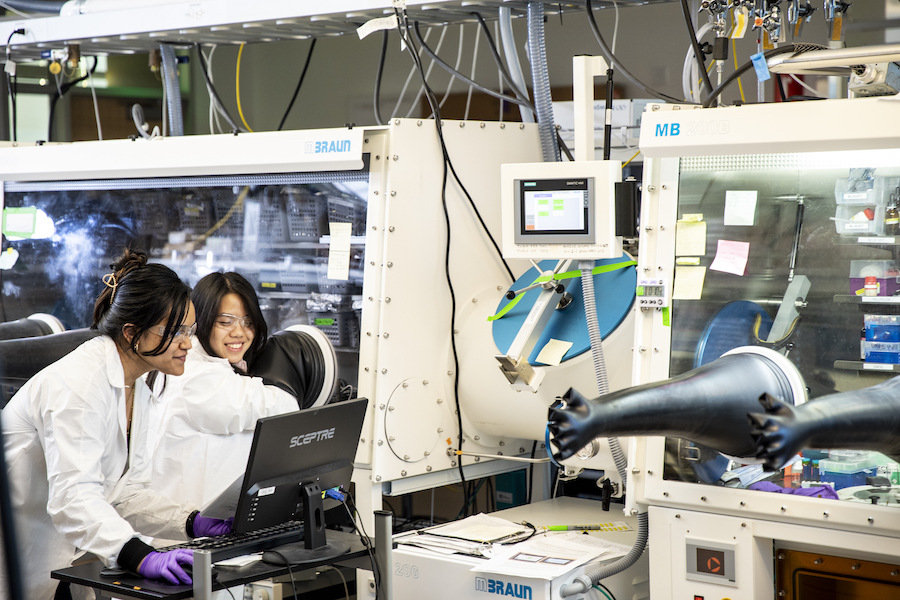 Steward is a TA for the Clean Energy Institute course Energy Materials, Devices, and Systems. Here, she works with a student to prepare to characterize the solar cell performance within a separate, controlled environment. This involves setting appropriate parameters within the software in order to take measurements.

ME Ph.D. candidate Malia Steward’s work focuses on solar energy – the fastest-growing source of new electricity in the country, according to the U.S. Department of Energy. Photovoltaic or solar cells are made of semiconductor material that absorbs the energy of sunlight and converts it to electrical power.

“When you change a specific layer of the solar cell, you also change the overall performance, either for better or for worse,” she says. “A high-performing solar cell excites me because it tells me that my original hypothesis – such as changing the thickness of a specific layer or modifying the semiconducting layers – was correct. This encourages me to expand further into the work with additional experiments, possibly discovering something new along the way.”

Steward aims to understand solar cells’ ability to convert light into electricity, as well as other contributing factors to their performance – including the surface’s appearance on a tiny scale, the surface’s profile and its light absorption. She also researches how placing solar cells within 3D textured structures can trap sunlight to generate more electricity.

The importance of mentorship

Steward’s interest in renewable energy began as an electrical engineering undergraduate student at the UW Bothell, where she transferred after completing prerequisites at Bellevue College. She began participating in solar cell research led by Seungkeun Choi, associate professor of electrical engineering at UW Bothell. She went on to earn bachelor’s and master’s degrees from the program, continuing her research with Choi as a graduate student.

Throughout the years, Choi’s mentorship has helped Steward stay motivated, even when experiments became frustrating and repetitive.

“Having a good mentor who sees something in you is a prized possession to hold onto,” she says. “My mentor has had a huge impact on my academic career, for which I am incredibly grateful.”

After completing her master’s degree, Steward considered going into industry, but Choi encouraged her to apply for the National Science Foundation (NSF) Graduate Research Fellowship Program. Steward ended up receiving the award, and she decided to pursue her Ph.D. studies. 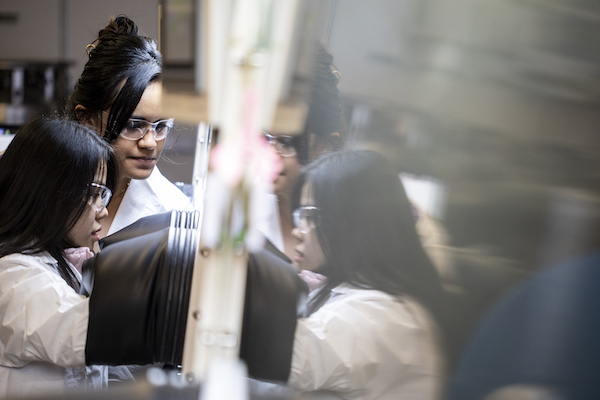 Steward and an undergraduate student prepare to measure the solar cell’s performance inside a separate, controlled environment for experiments involving materials sensitive to air and humidity. This involves the appropriate placement of the solar cell within the equipment set-up.

Steward’s electrical engineering background allows her to understand the conversion efficiency of solar cells and the amount of power that can be generated. However, she wanted to gain a deeper knowledge of material properties and how to create textured surfaces, which would require an understanding of advanced materials and manufacturing – one of ME’s research areas.

She chose the UW’s ME department for her Ph.D. program because of the faculty, the access to the Washington Clean Energy Testbeds at the Clean Energy Institute (CEI) and the microfabrication equipment in the Institute for Nano-Engineered Systems (NanoES). While continuing her solar energy research with Choi, she’s also conducting research with J. Devin MacKenzie, Washington Research Foundation Professor of Clean Energy and an associate professor in ME and materials science and engineering.

Steward credits support from ME faculty like MacKenzie and staff, such as her adviser Wanwisa Kisalang, for her success in her Ph.D. studies. She’s also enjoyed being a teaching assistant for the CEI course Energy Materials, Devices, and Systems, which enables her to share her research with students across a variety of disciplines.

“It’s exciting to see how the students react to their first exposure to measuring a solar cell after they fabricate them by hand,” she says. “Because the students are from various disciplines, they ask questions based on their understanding and knowledge upon analyzing the data. I respond in a way to answer their questions that makes sense to them, and our collaboration also helps me to look at my own research from a different perspective.” 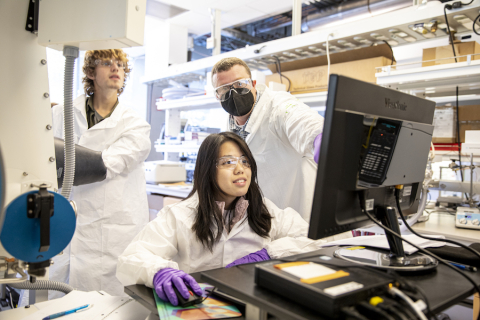 A multi-disciplinary course is training students across the scales of clean energy — from materials and devices to storage and power grid integration.

One part of Steward’s research focuses on how the different conditions of solar cells – such as changing the semiconductor’s thickness, altering the softness of the polymer that serves as the solar cell’s base or adding a wrinkled structure – can impact its light absorption and ability to generate electric power.

Steward is excited about the potential applications of her research – the creation of wrinkled structures could lead to more efficient organic-based LED lighting, for example.

“It’s exciting to be part of a field where your time dedicated to studying and research will help create impact,” she says. “It’s a pivotal time for students and researchers to collaborate and bring in new, innovative ideas to help make significant, positive changes to the planet, such as combating climate change.”