Lead-Zirconium-Titanium oxide (PZT) is a piezoelectric ceramics with high piezoelectric constants often used as sensors and actuators. Our research objective in this area is to develop PZT thin-film micro-sensors and actuators. One application is tiny acoustic actuators that fit into cochlea (part of inner ear) to generate significant acoustic stimulation as implantable hearing aids. Such actuators, when combined with shortened cochlear implant electrodes, have the advantage of better speech recognition in noisy environments. Furthermore, the combined acoustic and electric cochlear implants will have coordinated post-surgical mapping, single device to care for, more effective acoustic stimulation, and no occlusive effects.

We have been developing acoustic micro-actuators for intracochlear applications since 2004. Our research efforts include design, fabrication, prototyping, instrumentation, measurements, and animal tests. Some preliminary results are summarized as follows. 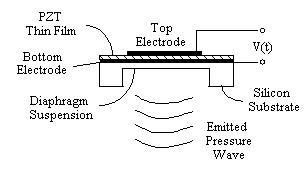 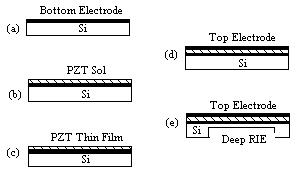 Layout Design. Figure 1 shows the cross sectional view of a PZT thin-film acoustic microactuator. The design consists of a silicon substrate, a diaphragm suspension, a PZT thin film, and a top and a bottom electrode. When a voltage V(t) is applied across the PZT film, the contraction and extension of the PZT film cause the diaphragm to vibrate in the out-of-plane direction emitting pressure waves. Our most recent design has a diaphragm size of 800 μm x 800 μm and a thickness (including the PZT thin film) of 1.3 μm.

Fabrication. Figure 2 shows the fabrication process. First of all, a Pt/Ti bottom electrode is deposited over the entire wafer (Fig. 2(a)). Next, PZT sol is deposited using spin coating (Fig. 2(b)) and subsequently sintered at 650°C to form PZT thin film (Fig. 2(c)). Top Au/Cr electrodes are then deposited onto the PZT thin film (Fig. 2(d)) and patterned (Fig. 2(e)). Finally, deep reactive ion etch (DRIE) is used to form the PZT diaphragms and release the probe from the silicon wafer (Fig. 2(f)). To finish, a parylene layer is coated via vapor deposition.

Figure 3 shows a photo of the fabricated PZT probe, revealing its small size. Figure 4 shows a cross-sectional view of the probe under SEM. We see not only a diaphragm but also its many layers designed in Fig. 1. 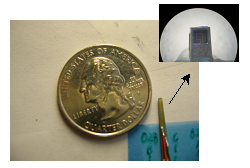 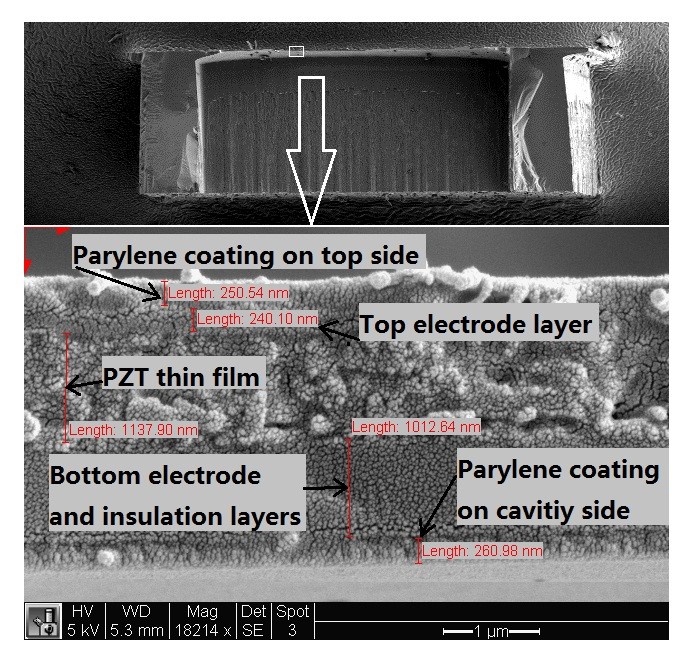 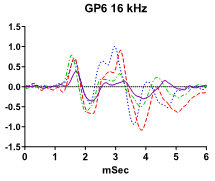 Animal Tests. Acute animal tests were conducted using guinea pigs. Auditory brainstem response (ABR) was measured for natural hearing and with the PZT probe inserted in the basal turn of guinea pig cochlea (Fig. 5). The similarity of the measured ABR proves that the animal does “hear” the acoustic stimulation from the implanted PZT thin-film microactuators.

Experimental Measurements. We had thoroughly tested the microactuator in air and in water before the animal tests. Figure 6 shows the experimental setup in water. A source from a spectrum analyzer, amplified by an AVC amplifier, drives the PZT probe. In the meantime, a laser Doppler vibrometer (LDV) measures the velocity of the center point of the PZT probe diaphragm. The spectrum analyzer then processes the driving voltage and LDV measurement to obtain a frequency response function (FRF). The measured FRF is then compared with that obtained in air. 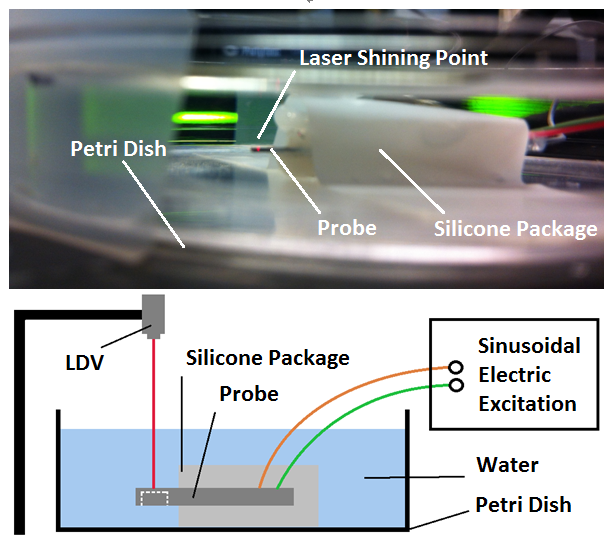 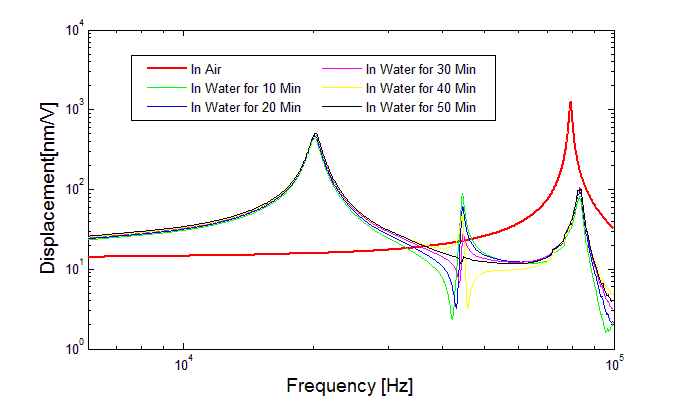 Figure 7 compares the FRF measured in air and in water. When the probe is dipped in water, two things happened. First, the first natural frequency instantly drops from 80 kHz to 20 kHz due to an added mass effect. Second, the static displacement increases from 13 nm/V to 22 nm/V in 10 minutes, and gradually inches up like a first-order system saturating at 28 nm/V in 2 hours. This occurs because water has infiltrated into the PZT thin film for the film is porous. 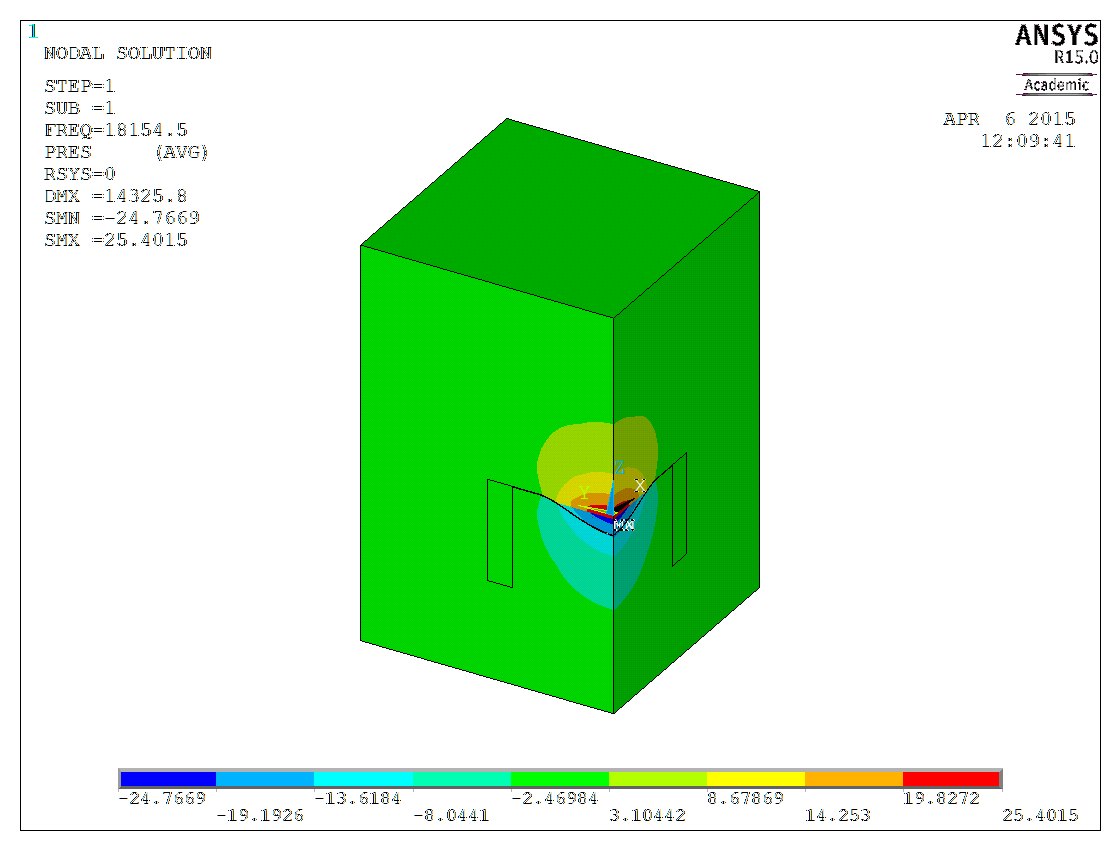 Finite Element Analysis. To predict the added mass effect, we create an ANSYS model that includes a structural domain and a fluid domain. The structural domain consists of a diaphragm, four rigid walls, and silicon residue between the diaphragm and the walls. The fluid domain is modeled via pressured-based, acoustic elements. Figure 8 shows the simulated pressure field. The predicted natural frequency is 18.2 kHz, which is very close to the experimental measurement of 20 kHz. The simulation also shows that the presence of the silicon walls and residue do affect the natural frequency for about 10%.