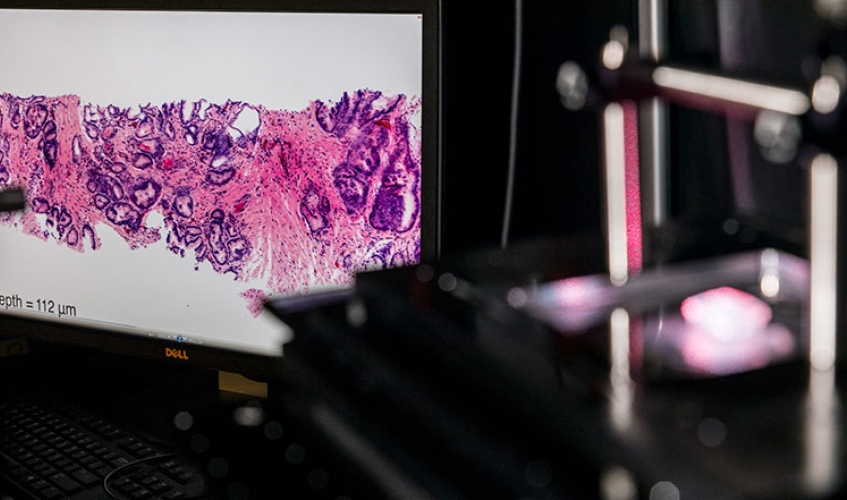 ME researchers are advancing cancer detection and treatment through innovations such as this benchtop microscope, which can be used to image tissue samples in 3D during surgery. Photo by Mark Stone, University of Washington.

Cancer affects millions of people and is among the leading causes of death worldwide. According to the National Cancer Institute, there are about 15.5 million cancer survivors in the U.S. today, and an estimated 1,735,350 new cases of cancer will be diagnosed in the U.S. this year.

From advancements in imaging technologies to innovations in cell therapy and nanorobotics, ME faculty are employing mechanical engineering and engineering mechanics at the nanoscale to create better means of understanding, detecting and treating the disease. Here we highlight a few of their projects. 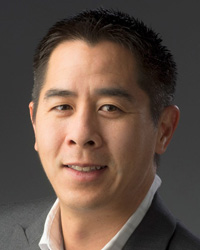 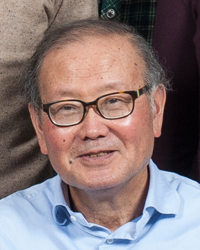 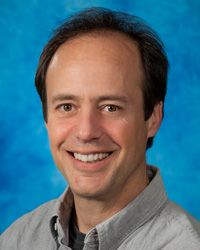 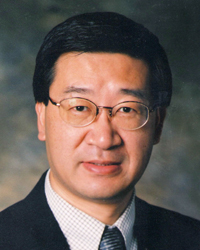 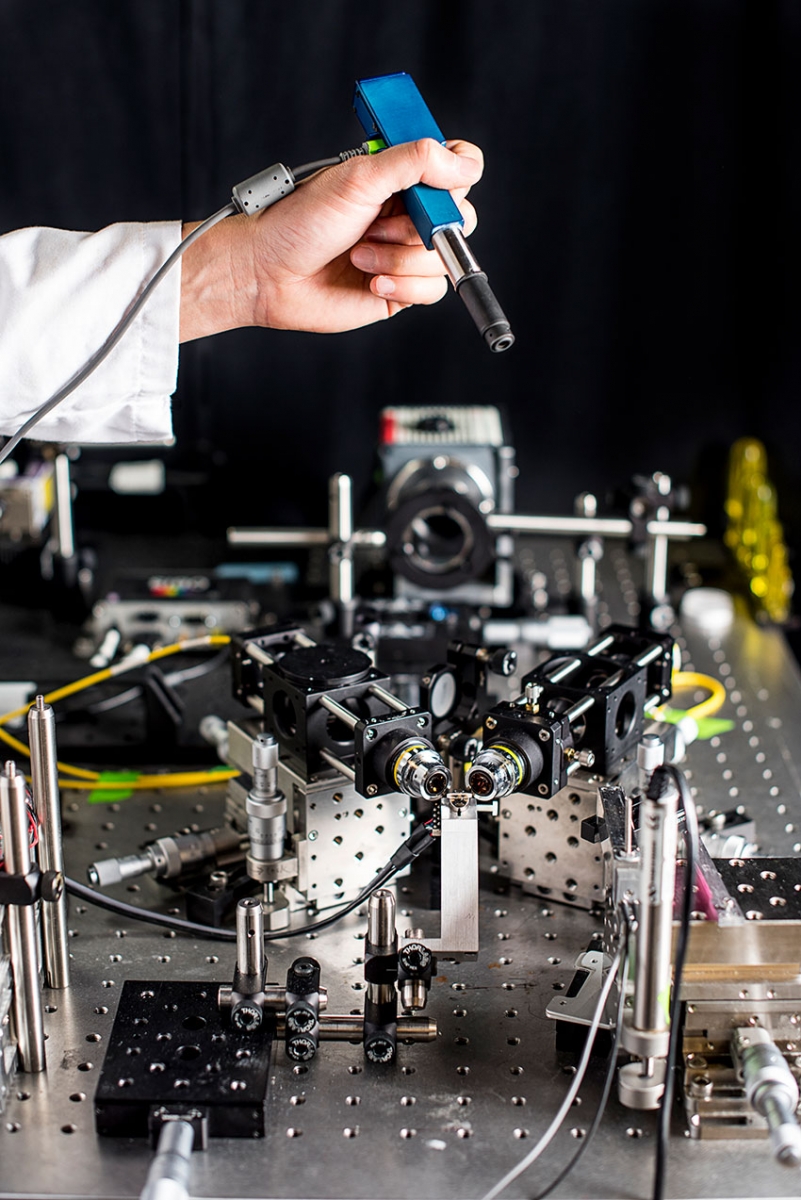 To create a handheld microscope, ME associate professor Jonathan Liu’s team miniaturized the larger microscope prototype seen on the table into a device roughly the size of a pen. Photo by Dennis Wise, University of Washington.

Pathologists play a critical role in diagnosing and treating cancer patients by imaging biopsies and surgical excisions at the microscopic scale. Unfortunately, the process of imaging tissues under a microscope — known as histology — is based on technologies that are slow and outdated, which can lead to non-optimal treatment of cancer patients.

Rather than cutting tissues into thin 2D sections that are laboriously mounted on glass slides and imaged with analog microscopes over the course of hours or days, ME associate professor Jonathan Liu is developing both miniature handheld microscopes that can zoom in on a patient’s cells non-invasively in real time — for example, to guide a tumor-resection procedure — as well as benchtop microscopes that can image surgical specimens and biopsies comprehensively in 3D without having to cut the tissues. This latter technology, known as “open-top light-sheet microscopy,” has the potential to usher histology into the big-data digital era, much like how digital CT X-Ray and MRI have revolutionized the field of radiology.

Liu and his pathology collaborators are starting a company to commercialize this technology and are continuing to refine these techniques and demonstrate their clinical value through studies funded by the National Institutes of Health and the U.S. Department of Defense. 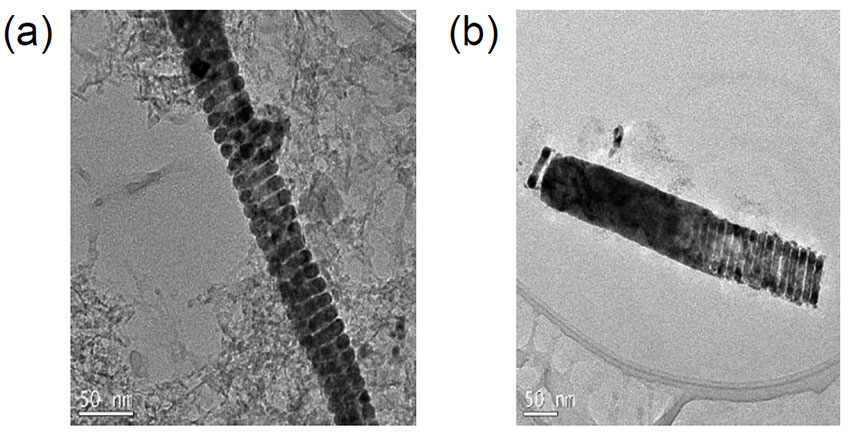 A nanohelix (left) is combined with a nanorod to create nanorobot (right). Figure courtesy of Minoru Taya.

Working closely with researchers in electrical engineering and radiology, Nabtesco Endowed Professor Minoru Taya is investigating ways to synthesize mechanically flexible nanohelices — key building blocks for biological materials, such as proteins and DNA – for cancer diagnosis and treatment. The team is creating these synthetic structures with magnetically active material and combining them with a FePd nanorod and nanohelix to form nanorobots.

Once these nanorobots are deployed in the body and guided to a cancer site via a magnetic field within an MRI chamber, another magnetic field can be applied to cause them to vibrate. The team hopes that this mechanical stress will damage the surrounding cancerous cells to the point of apoptosis or necrosis — cell death. This technology could prove especially beneficial in fighting difficult-to-treat cancers. Taya’s group will soon begin working with UW Medicine in clinical trial to test the efficacy of nanorobots in treatment. His work is supported by a $1.5 million Nano Robotics Initiative grant from the National Science Foundation.

Early detection is critical for turning cancer into a curable disease. Before the cancer has time to grow into a tumor, cancer cells express molecular markers that can be labeled with fluorescence. Optical imaging is the one non-invasive medical imaging method that can detect at the cellular level, but it is restricted in penetration depth in tissue. ME research professor Eric Seibel and bioengineering doctoral student Yang Jiang have developed the smallest optical endoscope that can image the fluorescent-dyed cancer cells as well as healthy tissue in reflectance. This multimodal (reflectance/florescence) scanning fiber endoscope has a tip the size of a grain of rice and a long flexible shaft that can be wrapped around a finger.

A conceptual scanning fiber endoscope clinical interface with two displays. Left is full-color reflectance image shown in grayscale, and on the right (A,B, and C) are modes that highlight cancer cells. Figure courtesy of Yang Jiang and Eric Seibel.

The many advantages of this device are being validated in research funded by the National Institutes of Health in first-in-human clinical trials. Invented and developed at the UW, this endoscope technology promises great potential and is highly desirable for applications ranging from image-guided biopsies for cancer diagnosis to guiding the removal of tumor cells during surgery.

The UW ME Human Photonics Lab, which Seibel directs, is partnering with leaders in cancer therapy, including the Fred Hutchinson Cancer Research Center, the University of Michigan, Stanford University and the Barrow Neurological Institute. A Seattle-based medical device start-up, VerAvanti, Inc., has licensed this technology.

Stem cell transplant procedures can restore blood-forming stem cells in patients who have had theirs damaged or destroyed by high doses of radiation or chemotherapy. Through a process known as cryopreservation, living blood cells and platelets are frozen and stored in cell banks until they are needed for transplants. At that time, they are thawed and re-introduced to the body.

In the fight against cancer, cryopreservation promises many opportunities for advancements in stem cell transplantation and therapy. However, one of the biggest challenges this process currently faces is cryoinjury — damaging or killing the cells while storing them at low temperatures.

Origincell Endowed Professor Dayong Gao and his team have been investigating the underlying physical and biological mechanisms related to cell injury. Their research shows that the challenge to cells during cryopreservation is not their ability to endure storage at low temperatures (-196°C in liquid nitrogen) as has been widely thought; rather, it is the lethality of an intermediate temperature zone (−15 to −60°C) that cells must be exposed to twice — once during cooling and once during warming. Based on these findings, Gao’s team is developing optimal methods, devices and novel technologies for specific cell types to prevent cryoinjury, achieve long-term cryopreservation, and allow for more expansive and diverse cancer treatment options.