The Autonomous Insect Robotics Laboratory (AIR Lab), led by ME Assistant Professor Sawyer Fuller, has recently created a palm-sized solar-powered drone that can find its way to chemical and light sources, the first robotic fly to take off without needing a wire and control the direction it faces, and the first onboard high-voltage power system that can precisely control wing thrust for insect-sized robots. 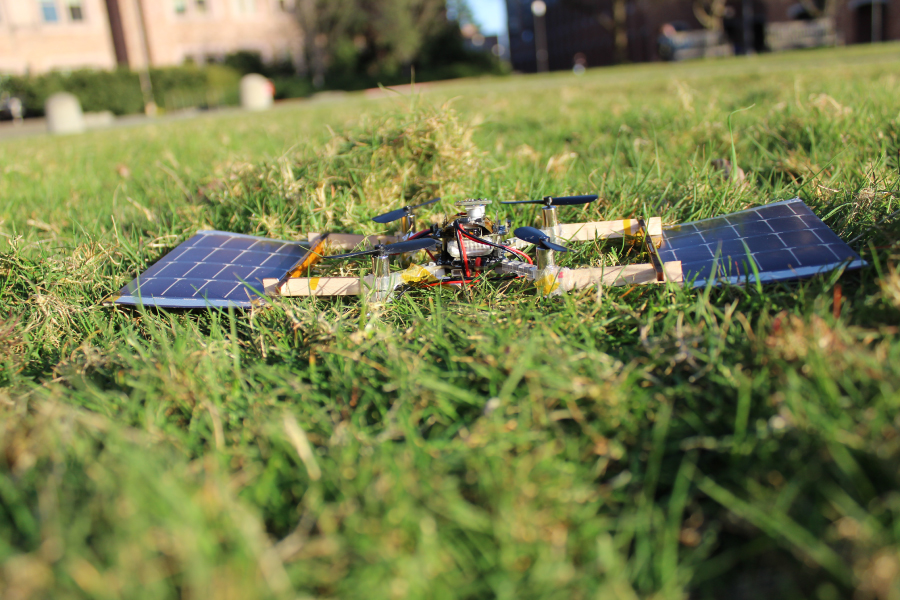 The Autonomous Insect Robotics Laboratory has created a solar-powered drone that can find its way to chemical and light sources. Photo credit: Nishant Elkunchwar and Suvesha Chandrasekaran

This work has been done in collaboration with UW researchers in the Paul G. Allen School of Computer Science and Engineering and the Department of Biology. An NSF grant is supporting a project to create design guidelines for the vision-based control systems of autonomous insect-sized robots.

These new developments all take inspiration from insect intelligence, including how insects use their resources efficiently to successfully navigate, sense obstacles and avoid collisions.

Small, autonomous insect-like robots can perform a variety of useful tasks, such as monitoring crops in greenhouses and finding the location of gas leaks. However, micro-robots have computational and memory limits, and researchers are still investigating navigation methods. A recently published review article in Science Robotics by Fuller and researchers from Delft University of Technology and University of Sheffield details potential solutions for overcoming challenges of developing AI for autonomous robots.

Instead of adding more sensors, computation and actuators, the researchers recommend taking inspiration from insect intelligence – particularly how insects use their resources efficiently – to create the AI for micro-robots. The researchers call for parsimonious solutions, which means minimizing robots’ power and complexity, often by using “mechanical intelligence” in the robot body design.

In the article, the researchers detail elements of insect intelligence – such as their body parts, sensory-motor coordination and swarming behavior – and how they can apply to robots. For example, using swarming in robotics means that tasks can be completed by robots using fewer resources.

In addition, the paper includes opportunities to accelerate the development of insect-inspired AI for autonomous robots. The researchers detail how one can better analyze the brains of animals that excel in a specific behavior, and how technological advances can help robots approach the energy efficiency and speed of insect brains. Read the full paper here.

The first wireless flying robotic insect takes off
Using a moth antenna to sense odor on a drone, with the “smellicopter”
A wireless camera on a beetle

“The field of insect robots comes with a license to re-think almost everything about robotics. This is challenging because scaling physics makes many classic methods in robotics impractical. But it is also what makes it a really exciting research area,” Fuller says. “We are solving problems in robotics that have never been encountered before. The results have been new algorithms, actuator and fabrication technology, and sensors that are dramatically lighter and more efficient. This will not only improve robots of all sizes, but have wide-ranging applications in other areas of engineering. Looking at things from a new perspective is very often a recipe for success.”

Fuller is working with colleagues to create a fully autonomous robot fly that can use a sense of smell to find its way to its source, where it will send a wireless alert. This could be used to detect a forest fire starting, an invasion of pests in agriculture, buried explosives or leaks of the greenhouse gas methane.

“This is a moonshot project that will require the combined expertise across a host of different domains,” Fuller says.