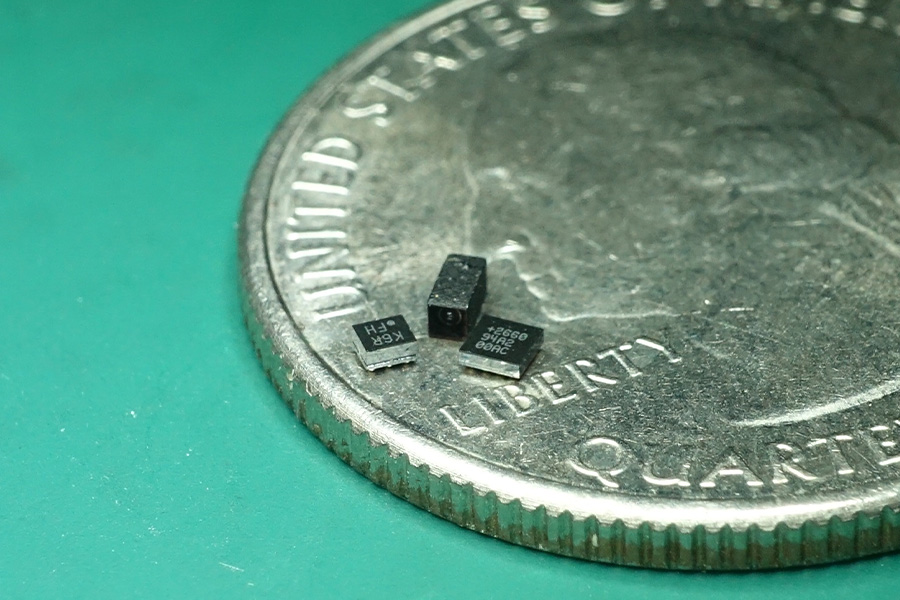 Shown on a quarter, the components of an avionics system for a gnat-sized robot are an accelerometer, optic flow sensor and microprocessor.

The sensing system is made up of only a three-axis accelerometer that detects airspeed and a tiny optic flow camera that enables the robot to estimate and reject wind. Both devices are commercially available and can be scaled to fit a flying robot weighing 10 mg or less. Fruit flies’ ability to navigate wind inspired the sensing system.

The team published a paper about the research, “A gyroscope-free visual-inertial flight control and wind sensing system for 10-mg robots,” in Science Robotics in November 2022. The authors are ME Assistant Professor Sawyer Fuller and Ph.D. students Zhitao Yu and Yash Talwekar.

Other small drones that can autonomously hover and stabilize have used a system that involves a gyroscope, which measures angular velocity. This system isn’t ideal for tiny robots because of its weight and power consumption.

Through simulations and experiments, the researchers demonstrated that the 2-mg accelerometer can stabilize a 10-mg robot while meeting the size, speed, weight and power constraints of a flying robot – even one that weighs less than a grain of rice. Compared to previously demonstrated hovering controllers, the accelerometer and camera system reduces the tiny robot’s mass by more than 20-fold and power usage by more than 100-fold.

“Conventional wisdom holds that a gyroscope is an indispensable part of an inertial measurement system. Our flight control system turns that notion on its head by dispensing with the gyroscope altogether,” Fuller says. “We used a simple observability analysis to show that a gyroscope-free system is possible for small aircraft. The reason nobody really thought of this before is that, for most aircraft bigger than a gnat, gyroscopes are so small that it is a no-brainer to include one. Not so for a gnat-sized robot that weighs less than a grain of rice!”

The research is a key step toward the development of tiny aerial robots that could be used to perform a variety of tasks, such as monitoring crops in greenhouses or finding the sources of hazardous fumes. The sensing system could also reduce sensor mass and power for 100-mg robots like the RoboFly, the first wireless flying robot.

“The AIR Lab provides me with great opportunities to do robotics research, not only in the software development and machine learning side of robotics but also in the hardware side,” Yu says. “We design and make our own robots and research cutting-edge topics in robotics, such as sensing, control and robot vision inspired by insects.”

“Bringing autonomy to aerial robots at such a small scale is a unique challenge,” Talwekar says. “It pushes you to learn and leverage skills from multiple disciplines to come up with highly creative solutions, which is a very rewarding experience.”