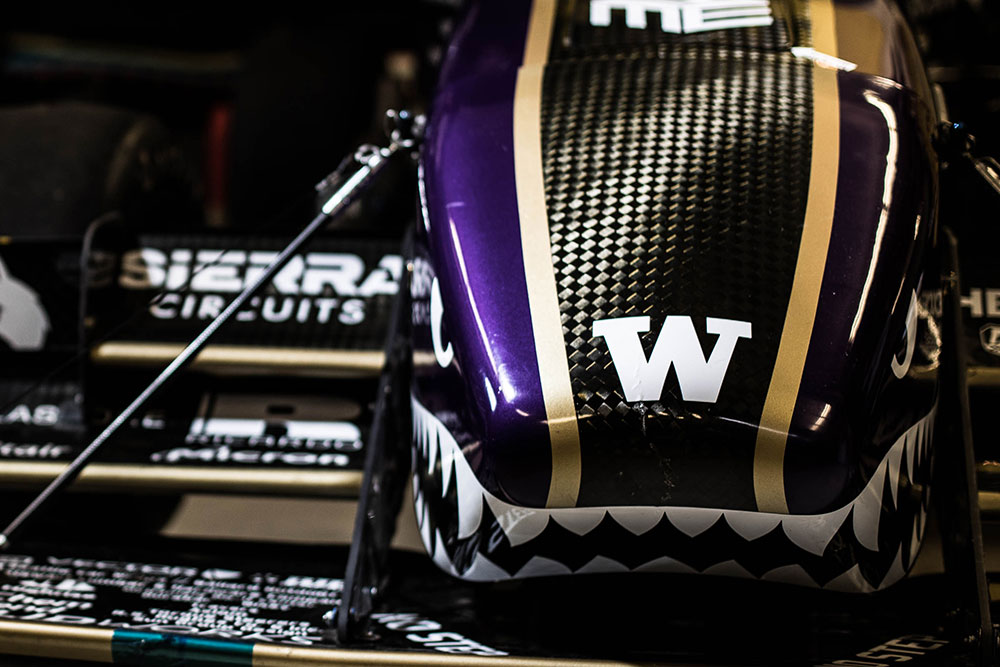 The distinct crisscross pattern of carbon fiber is visible in the custom-built UW Formula Motorsports racecar. Photo by Mark Stone, University of Washington

Stronger than steel and lighter than aluminum, carbon fiber materials are one of the key enabling technologies of the 21st century. They play an especially important role in Washington, the world leader in carbon fiber composite manufacturing. Just as silicon is the material that underlies the innovation ecosystem of Silicon Valley, so carbon fiber is to the state of Washington.

Advances in air travel, renewable energy, space exploration, transportation and many other industries rely on their growing use. As the state’s top research institution, the University of Washington is a leader in carbon fiber innovation — and in understanding its impacts on public health, safety and the environment. UW research promises breakthroughs in improved manufacturing techniques, better standards and validations, and support for the transition to more sustainable and versatile versions.

“Anything where quality and weight matter, these have become the materials to use,” says mechanical engineering professor Santosh Devasia, who directs the Advanced Composites Center (ACC), a new initiative dedicated to advanced composites research and education.

What is a carbon fiber composite?

The materials typically thought of as carbon fiber, whether in road bikes or airplane hulls, are really carbon fiber composites and are made up of two main parts: the threads of carbon themselves, and a matrix, which is the material binding them together. 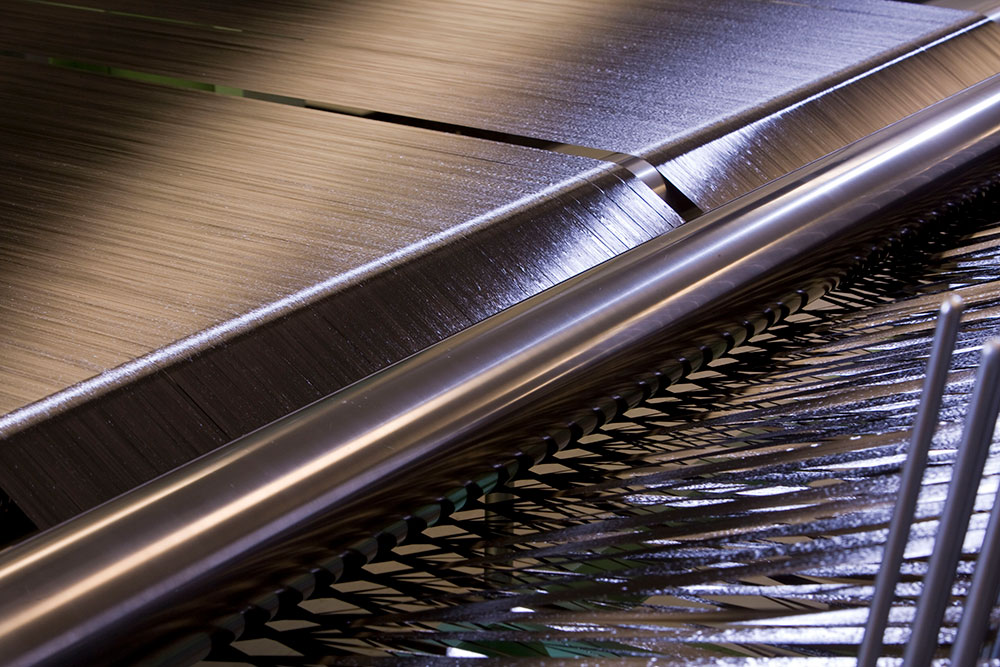 First discovered in the 1960s, carbon fiber composite materials combine the strength of a metal with the weight of a plastic, though the truth is more complicated.

“With carbon fiber you have to know the direction your load will be applied and embrace the way you align the fibers to withstand that force,” says Marco Salviato, associate professor of aeronautics and astronautics and an ACC co-director. “And in terms of the matrix, even molecular-level differences in the polymer and process that you use really matter.”

It was clear soon after carbon fiber came out of the labs that these materials were special. But even though they rely on cheap and abundant resources, they remain relatively expensive since the process of making them involves heat, pressure and quite a bit of quality control.

The first products to widely use carbon fibers were sporting equipment like tennis rackets, golf clubs and skis, but by the 1980s the processes and materials themselves had improved and aviation quickly became the dominant application.

Here in Washington, The Boeing Company began using carbon fiber in various components and an entire supply chain sprung up. Today there are an estimated 1,400 companies and 130,000 jobs in the state that involve advanced composites.

“Any history of composites has to include the 787,” says Salviato. “Boeing showed the world what’s possible and brought them into the mainstream.”

Fully half the weight of Boeing’s 787 aircraft is carbon fiber, making it 20% more fuel efficient than a traditional design. Salviato says every 1% shaved off the mass of a plane can reduce up to 3,200 tons of carbon dioxide emissions over its lifespan, the equivalent of taking 700 passenger vehicles off the road for a year. Any approach to improving airplane fuel standards will require carbon fiber.

But aviation is only one of many industries relying on these materials. Just as Silicon Valley had Apple, HP and Intel, Washington has several major companies invested in advanced carbon fiber including Blue Origin, Toray, SGL Carbon, PACCAR and Electroimpact.

Still, researchers say there’s a long way to go to improve carbon fiber composites, particularly when it comes to manufacturing and recyclability. Though carbon fiber offers big environmental benefits in making renewable energy more competitive and transportation more efficient, the materials themselves can’t be easily recycled. As a result, wind turbine blades have already begun piling up in landfills.

To support and drive the future of carbon fiber and related materials, the UW is constructing a new 16,000 square foot facility north of campus at Magnuson Park to house the ACC. A priority for the center will be better use of data to guide the way composites are manufactured. 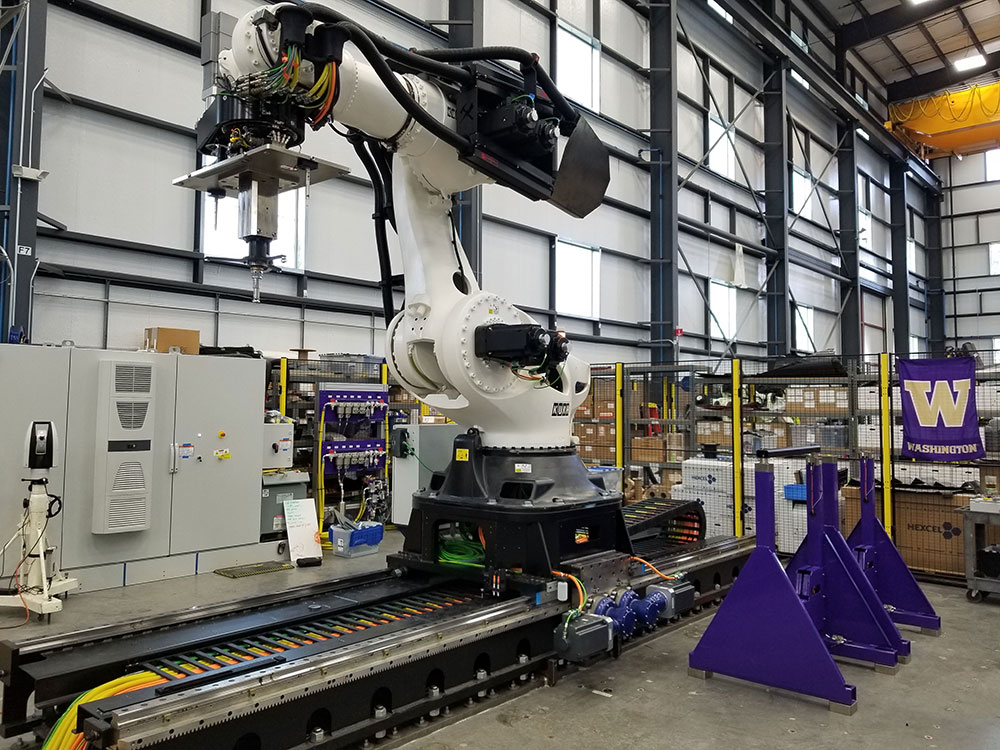 A cutting-edge automated fiber placement system, shown here under construction at Electroimpact, will be a centerpiece of the new ACC. These robotic arms automate the process of laying down heated carbon fiber to fabricate components much faster and more efficiently. Photo courtesy of Electroimpact.

“Compared to metals, the properties and performance of advanced composites involves a lot more variability and uncertainty,” says Navid Zobiery, assistant professor of materials science and engineering. “Data-driven approaches can enhance our understanding of this complexity and will be crucial in the stride toward high rate and automated fabrication methods that will make them cost effective for energy, automotive and other evolving markets.”

Another concern is replacing materials that use a thermoset matrix­ — which once set is almost impossible to alter, recycle or mend — with a thermoplastic matrix. Thermoplastic carbon fiber materials have many of the same properties as their thermoset cousins, but by heating them up they can be re-shaped and re-worked.

“As these materials become more commercialized, we have a responsibility to think about what happens when they reach the end of their lifetime,” says Junlan Wang, a professor of mechanical engineering that also co-directs the ACC. “Thermoplastics offer a path to recycling and come with benefits like the ability to weld, contour and use additive manufacturing techniques.” 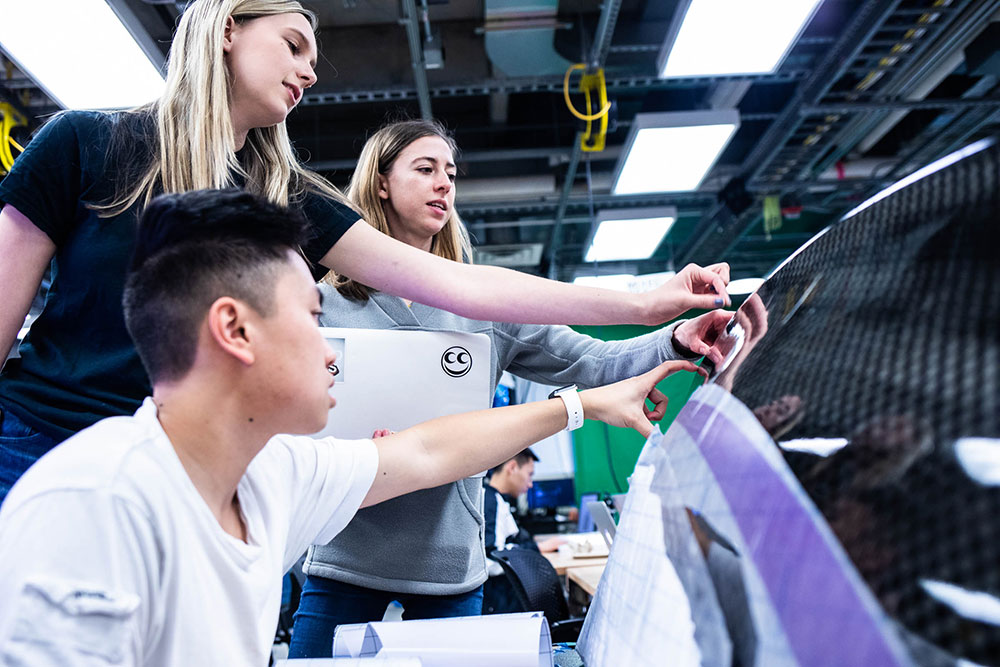 Researchers say one of the biggest benefits of the ACC will be acting as a hub for setting standards, validating ideas and growing the ranks of engineers experienced in these materials. UW engineers already work with the materials regularly, using them for device prototypes, student clubs like Formula Motorsports and UW Hyperloop, and an array of research projects. Those opportunities will greatly expand when the ACC is finished, cementing Washington’s role as a world leader in carbon fiber for years to come.

The Advanced Composites Center’s vision is to build a robust innovation ecosystem for industry and academia to advance the field of data-driven methods for composites manufacturing.