Insect flight has recently generated significant interest within biology and engineering communities. For biologists, such studies provide critical insights into the sensorimotor coordination of movement in animals. For example, knowledge of the instantaneous wing shape helps determine the direction and magnitude of aerodynamic forces acting upon the wing. This leads to an understanding of lift-to-drag ratio, thrust production and aerodynamic efficiency of insect flight. Moreover, wing deformation activates strain receptors (mechanosensation cells), which provides the insect brain with feedback used to identify flight status. Insect wings are richly imbued with strain sensors.

For engineers, insect flight research can help realize autonomous flying objects, such as flapping- wing micro-aerial vehicles (MAVs). Flapping-wing MAVs are capable of performing difficult maneuvers and stationary hovering while consuming relatively little power. These characteristics are desirable for indoor flight, and consequently have generated interest in potential military surveillance and reconnaissance applications. While several MAVs have been successfully developed, there remains a necessity for design optimization in order to reduce weight, power consumption, and cost.

The aim of this ongoing research is to dynamically model the complicated mechanisms crucial for highly versatile insect flight. The primary research goal is to develop and validate an inertial-elastic model of the insect forewing.

1) Development of an Inertial-Elastic Forewing Model

Traditional models of the insect forewing focus on characterizing the aerodynamic performance of the flapping wing. However, solving such models is often computationally infeasible and generally leads to gross simplifications. Other models treat the forewing as a rigid body and neglect the passive deformation of the flapping wing. The rigid body simplification is significant, as researchers have shown a positive effect of dynamic bending on lift/thrust production of the insect. Furthermore, the temporal strain during flapping is speculated to serve as a neurological feedback mechanism that allows insects to stabilize themselves in the presence of disturbances, such as wind gusts.

Empirical evidence shows that the deformation of the wing is largely due to inertial-elastic forces, suggesting aerodynamic loading has little effect on the wing strain. Leveraging this fact, we have developed a reduced-order inertial elastic model of the forewing treating it as a deformable body subject to three-dimensional rotation about a fixed point. The model has several important characteristics that make it very versatile. First, the model is reduced order, with the order being equal to the number of vibration modes retained. Secondly, the model is capable of accommodating arbitrary geometry, meaning it can be used for any insect or MAV wing. Lastly, the model is capable of predicting temporal strain or other physical quantities, meaning it may inform MAV designers on strain-based control systems.

To demonstrate the utility of the model, it was applied to the forewing of the Hawkmoth Manduca Sexta. First, a finite element model (FEM) of a simplified Manduca Sexta forewing was constructed to determine the vibration modes of the wing (Fig. 1). The analytic model is then solved to determine the modal response of each vibration mode. The results provide tremendous physical insight into what forces are predominately responsible for creating strain in the wing. For example, gyroscopic forces occurring at twice the flapping frequency (near the resonant frequency of the wing) were found to have the largest contribution to dynamic bending, a result that is consistent with biological evidence (Fig. 2). Furthermore, gyroscopic forces were found to create a beat phenomenon in the strain profile, which may be used to determine the yaw rate of an insect. This finding, in conjunction with other temporal strain patterns, may help realize strain-based control mechanisms in flapping wing MAVs. For additional details on the formulation of the inertial-elastic forewing model, please click here.

This model was then validated two rotation configurations at a time using a custom made two-axis rotation stage. An aluminum triangular wing was constructed with a strain gage near the wing root so that temporal strain could be evaluated. Experiments were conducted first in air and in vacuum so that aerodynamic forces could be decoupled from inertial-elastic forces.

In general, experimental results matched closely with theoretic predictions. For example, in the roll-yaw configuration, the theoretical model predicts inertial and gyroscopic forces will generate dynamic bending. Based on theoretic predictions, inertial forces cause strain at the flap frequency while gyroscopic forces induce strain at twice the flap frequency. Figure 3 compares the theoretical and experimental results for the roll-yaw configuration, showing the model is capable of predicting strain within reasonable accuracy. Aerodynamic forces were found to have only a minor contribution to dynamic bending, and the idea that gyroscopic forces play a significant role in strain development was corroborated. These results indicate the inertial-elastic forewing model can be used within some contexts. For additional details on the experimental results, please click here. 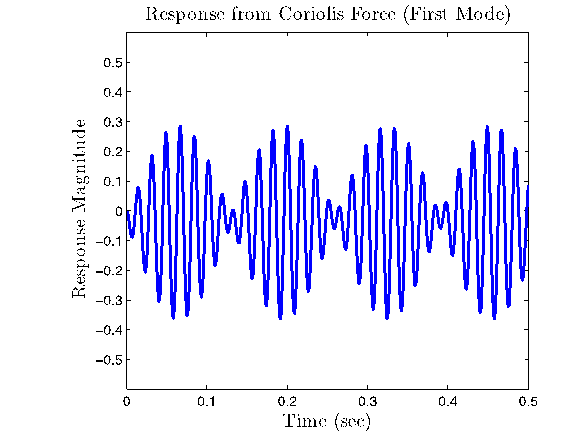 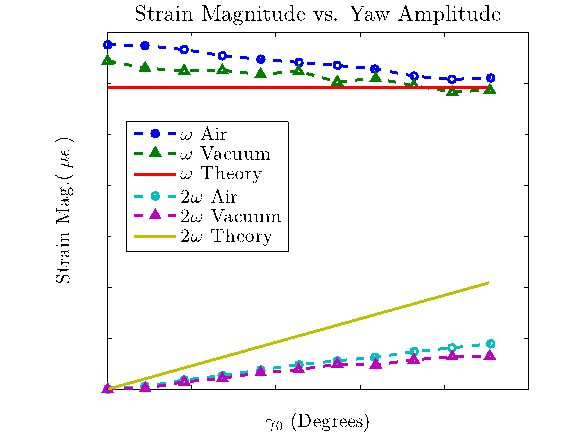 Jankauski, Mark A., and I.Y. Shen. "Experimental Studies of an Inertial-Elastic Rotating Wing in Air and Vacuum." IMAV 2015: Accepted for publication